Rent The Town That Dreaded Sundown (2014) 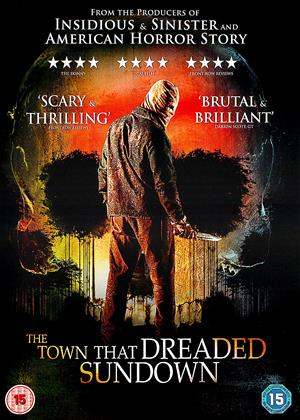 Rent other films like The Town That Dreaded Sundown

Reviews (2) of The Town That Dreaded Sundown

This is an ok serial killer film. The story ok , it managed to keep me watching through to the end. It's one of those films that you enjoy at the time but in a few weeks I won't remember it .

Spoilers follow ... - The Town That Dreaded Sundown review by NP

65 years ago, a masked man attacked residents of small town Texarkana. Now it appears the miscreant is back. Speaking with a modulated voice in slow deliberate tones, the ‘moonlight murderer’ begins his killing spree all over again.

The production values are decent, the acting is convincing. So why do I find this tortuously dull? How can something with a fair amount of screaming teens and restrainedly gruesome killings not arrest my attention?

Could it be that Jami (Addison Timlin) speaks in a monotone and insipid manner no matter what the emotion? To be fair to her, her contempories are often much the same. Far from the strutting posturers that frequent such films usually (which is a mercy), they are on the other end of the spectrum. Humbly mumbling their lines to one another, it is difficult to work out one character from another. Inoffensive –sweet even - to the point of inertia, these characters are barely even cyphers for the marauding killer, who is also without much in the way of presence.

It may be that I am simply not in the mood for this, but there seems to be no life in any facet of the proceedings. Even the occasional sex scene fails to break free of this miasma. Why is the murderer doing these things? Just *because*, really. I feel bad about my nonchalance – after all, a great deal of work has presumably gone into creating this: the bleakness of the locale is nicely conveyed by Director Alfonso Gomez-Rejon, and Ludwig Goransson’s musical score is nicely haunting; there’s a good set piece where a couple wake up to find their scarecrow perched on the wooden stand has been replaced by the bloody corpse of a young girl … and then within moments the lacklustre performance of those trying to solve the mystery drags things back down again. Sadly unengaging throughout.