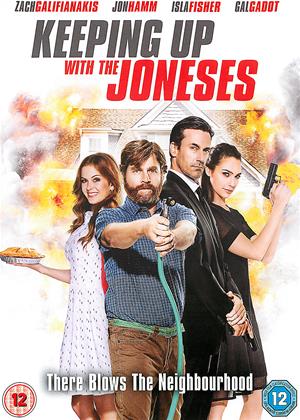 Rent other films like Keeping Up with the Joneses

Reviews (1) of Keeping Up with the Joneses

Madcap and corny - Keeping Up with the Joneses review by PT

john Hamm and Gal Gadot (the Joneses) fresh out of the glamour factory become the new neighbours of Zach Galianfiakis and Isla Fischer.

The Joneses seem to have it all, interesting jobs and pastimes, as opposed to the normality of their neighbours. Isla Fischer starts to become suspicious of them and begins to spy on them, even following Gadot. Persuading her husband of their suspiciousness they break into the Joneses house where they discover their secret.

This Joneses discover they've been compromised and must act upon it. Can't really say no more except that then the adventure really begins.

Okay this is not a great film and very corny , but a good pace and some funny moments kept me entertained for the duration. All in all, enjoyable.

Keeping Up with the Joneses review by Adrijan Arsovski - Cinema Paradiso

Okay, before we begin, a disclaimer: I liked this film and I had tons of fun during this film. Why? Don’t know. Perhaps it’s the overused story of undercover agents that pretend to be regular folk while percolating lethal amounts of suspicion; or maybe it was the overacting by the main cast which made the whole ordeal more than what the script bargained for; or even the blatant jokes that, most often than not, fall flat on their faces without even eliciting a fake chuckle. Wait, I think I just convinced myself out of liking this film, which is kind of a bummer when one comes to think of it.

Keeping Up with the Joneses is directed by Greg Mottola (Superbad, Paul), and stars couple of familiar faces including Hangover star Zach Galifianakis as everyday man Jeff Gaffney, Isla Fisher playing his wife Karen Gaffney, Jon Hamm and the eternally gorgeous Gal Gadot as Tim and Natalie Jones respectively, and some other additions to the cast such as Patton Oswalt as the sleazy Scorpion and Matt Walsh portraying a guy called Dan Craverston of all names. Together, the cast (or rather: the ensemble) is not devoid of chemistry and works great when the script allows it so, which often ends up not being the case at all.

The film follows the Gaffneys as they try to unravel the mystery behind their attractive neighbors who are also high achievers as well. Soon, we find out that nothing is as it seems, with Jeff and Karen suddenly becoming involved in a world of criminal undergrounds, a heist-gone-wrong, spying a la James Bond style, and other stuff that normal people could hardly dream about, yet alone do it in real life. And since Keeping Up with the Joneses is listed as a comedy, there are some jokes to be heard but, and that’s a big BUT: they elicit little to no laughs from the audience. Additionally, the main cast is attractive (bar the character Zack plays), charming, and one can tell they’re really trying here, but even an ensemble of this caliber cannot salvage the underwhelming material they’re presented with, as every sentence feels as if no normal earthly being would pronounce it, like ever (ok, maybe sometimes).

Besides all of the above, the movie is still somewhat fun, an if not for a certain scene involving Gal Gadot and lingerie, Keeping Up with the Joneses would probably end up being forgotten as the last year’s snow.

Bottom line, if you like decent action, mediocre comedy, Zack Galifianakis yelling out loud, Gal in lingerie, John Hamm’s odd suave demeanor, and Isla Fisher’s boobs-on-display, then boy do I have the right film for you.