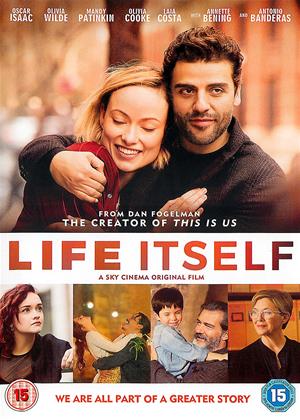 Reviews (2) of Life Itself

Unenjoyable and unpleasant - Life Itself review by RC

I have to confess I couldn’t finish it but it really is a film that has nothing to say but is trying very hard to be important and insightful. Like a teenager lecturing about the world when it hasn’t learnt anything.

A Great Disappointment - Life Itself review by AS

The film's description gave me the impression that this would be a cheerful story of a couple's progress from University through various careers and family situations with the usual ups and downs. Instead it was a depressing account of fatal accidents, bloody suicides and extended depression and gloom. Must appeal to some but not my cup of tea.

Trust is broken early in Life Itself. The first scene features Samuel L. Jackson as a narrator that talks too much and is unreliable with characters we’re following or who we’ll be following. This concept is abandoned quickly as we pull out to reveal a flawed screenplay. The one replacing it after this fake-out isn’t much better, trying too hard to be an all-encompassing picture about life without saying anything all that interesting other than the obvious mysteries of it all.

The film is an anthology of melodrama, following characters who try to make the most of their lives that are punctuated by tragedy and depression, forcibly laced with small quirkiness as if to think death by vehicles and gun-induced suicides are a hoot. Oscar Isaac starts the picture as Will Dempsey, a man going through therapy after the loss of his wife (Olivia Wilde) and not coming to terms with the fact that he has a surviving daughter. We spend time with him in his therapy sessions where he showcases his nastier side of talking about the detailed aspects of his wife’s parents had died young and how he tried masturbating to his therapist.

But before we can be disgusted further, the film abandons this story quickly and shifts to the life of his daughter Dylan (Olivia Cooke). She finds herself shaken by both her parents dying but only after those arcs have played out. She grows up with Will’s parents and becomes a rebellious girl who just misses her parents, having dreams or flashbacks or whatever to the moments when their lives ceased, despite not witnessing such events herself. We abandon this story as well for that of Rodrigo González, a Spanish boy who witnesses the death of Will’s wife. He is haunted by the event and his family has some issues of their own they’re working through. There’s a family drama and relationship drama, all stirred up with a light sense as though we’re supposed to me more intrigued by the absurdity of their lives than their very characters.

Life Itself throws a lot at the wall and very little sticks. Wilde will break the wall at one point by pointing out in college how her thesis will be on the unreliable narrator, how even a narrator can be at fault when describing life because life doesn’t come so easily transcribed. Whoa, how deep. Further trying to push this notion of life’s majesty and peculiar nature is the insistence of plugging in the music of Bob Dylan, where characters believe if they listen long enough to his music that they’ll come to discover the meaning of life. Even if we were to buy into this malarky, the end result of lessons learned about life doesn’t amount to some cumulative progression of enriching the soul: it’s about not standing in the middle of the street for oncoming traffic, which apparently takes two generations to learn this concept.

There’s an extra layer of bitterness I had towards the film for coming off so unfocussed with its desires to communicate a theme about how our lives are ultimately connected in the interesting and scary world. The script comes written as though it were written by a college student who spent a lot of time listening to Bob Dylan and had some odd revelation about humanity somewhere between booze, coffee, and drugs. And whatever that epiphany may have been, it’s not on the screen. Or it sounded better in their heads. I’m sure if I cranked up some Bob Dylan while watching I’d get the ultimate message. Or I’d at least get to hear some great music and drown out the misguided drama of this third-rate drama that wants to say everything and spits out nothing.