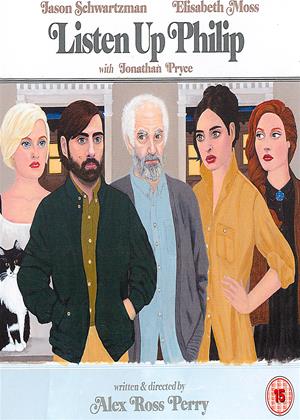 Synopsis:
Combining intellectual ambition with a singular comic sensibility, the third feature film by writer-director Alex Ross Perry marked a defining moment for the American independent cinema of the 2010s. As with his previous features 'Impolex' and 'The Color Wheel', the blackly hilarious 'Listen Up Philip' is distinguished as much by its literary pedigree as by its fine attunement to atmosphere, sense of place, and, enabled by the camerawork of Scan Price Williams, the texture of the image.
Jason Schwarfzman, in one of his most accomplished roles since such Wes Anderson collaborations as 'Rushmore' and 'The Darjeeling Limited', achieves the height of comic verbal violence as the novelist Philip Lewis Friedman who, having received his first taste of literary acclaim, embarks upon the publicity campaign for his soon-to-be-published second novel, 'Obidant'. The attention of his literary hero Ike Zimmerman (played by the first-rate Jonathan Pryce), a major novelist so decades his elder, leads to an open invitation to abscond from Brooklyn and work from Zimmermans small-town home upstate. And so the stage is set for all-out warfare between Philips seemingly irrepressible ego and the emotionality of his talented photographer girlfriend Ashley who, in a brilliant performance by Elisabeth Moss, exhibits the kind of dynamism that could dull Philip's edge for good.
Actors:
Jason Schwartzman, Elisabeth Moss, Jonathan Pryce, Krysten Ritter, Joséphine de La Baume, Jess Weixler, Dree Hemingway, Keith Poulson, Kate Lyn Sheil, Yusef Bulos, Maïté Alina, Daniel London, Samantha Jacober, Lee Wilkof, Joanne Tucker, Steven Boyer, Teddy Bergman, Craig Butta, Rachel Oyama, Babs Olusanmokun
Directors:
Alex Ross Perry
Producers:
Joshua Blum, Toby Halbrooks, James M. Johnston, David Lowery, Katie Stern
Voiced By:
Eric Bogosian
Narrated By:
Eric Bogosian
Writers:
Alex Ross Perry
Studio:
Eureka
Genres:
Comedy

Reviews (2) of Listen Up Philip

I basically agree with the critic's review. I found the film hard to watch, as the two main characters are male authors who are obsessed with their work, their success (or not) , other people's view of them and their sense of their own importance. It is very well acted and Elizabeth Moss (the only human character in the film) gives a wonderful performance as Ashley. There is a great moment where the camera shows a long close up of her face as she fights between grief, self-pity and triumph. The other thing I liked was the original soundtrack by DEwitt. Long bluesy trumpet solos - blowing one's own trumpet?

Jason Schwartzman is best cast as a cocky little jerk which makes Listen Up Philip one of his finest roles. It plays to his crassness with a character that is bitter and condescending to all around him. This is the perfect little independent dramedy for him to play off of in a script that highlights the pompous and bitter nature of successful authors. It takes a sharp aim at all their fears, obsessions, love and hatred layered underneath that common coating of egotism.

From the very first scene, Phillip is quickly established as an unlikable human being. He invites his ex-girlfriend to lunch only so he can rub his new book and success in her face. He later grabs a beer with his old friend he parted ways with to do the exact same thing. To Philip this is both fulfilling and draining as the spoils for all his sacrifice. He has reached the top of the mountain after stepping over so many people and looks down on them for being nothing more than hurdles in his life. Phillip is a jerk to everyone from his employer to his photography girlfriend Ashley (Elisabeth Moss). Everyone is just a peon getting in his way of becoming a famous author.

Phillip finally gets the chance to achieve his dream when he spends time with his idol Zimmerman (Jonathan Pryce), an elderly author who secludes himself in his summer home. At this point, Phillip has essentially abandoned his girlfriend to her own world while she tries to find meaning through exercise and cats. But Phillip’s mentor doesn’t turn out to be the grouchy old sage he thought either. Both Ashley and Zimmerman have changed their lives due to the presence of Phillip. It’s up to the titular character if he find peace in one of these worlds or if he just crumbles down into the murky depths of his snooty roles as a college writing teacher.

The entire movie is layered with overly explanatory narration - spoonfeeding all of Phillip’s thoughts and of those surrounding him. Read as a novel, it’s perhaps the only language that Phillip knows how to read as he can’t read all those around him. Incapable of empathy, he leads people on and bites back with more snark than the most pompous of professors. An intern takes an interest in him, makes out with him at a party and just brushes her off. A student of Phillip asks him for a letter of recommendation to which he responds with spite about the hopelessness of an internship. It’s a film where you absolutely hate this character, but compelled to watch seeing if there may some redemption anywhere within his spirit.

Schwartzman is perfectly cast as the bitter hipster Phillip - almost embodying a younger version of Jeremy Piven. Anyone who has known a full-time author has seen traits of Phillip’s behavior and this is the penultimate of the worst characteristics. It’s practically the author equivilant of Taxi Driver (but, you know, without all the murder). Both Moss and Pryce also turn in exceptional performances for very three-dimensional characters capable of great mistakes and unique talent. So engrossing are their characters that we thankfully get to spend as much time with just them as we do with Phillip. We get to know the people that Phillip passes over so crassly or views through his own goal-focused lens. This breaking up of tales makes the film

Listen Up Phillip is a surprisingly compelling look at one man’s world clouded by narcissism and artistic integrity. It’s a strange little indie black comedy of unorthodox character arcs, but somewhat intoxicating for all its nasty examinations of humanity. That’s quite an accomplishment for a film that hardly gives you any reason to like anybody on screen for all their egotism. They’re terrible people, but perhaps their appeal is that the film never gives a solid reason to like them. If nothing else, it’s an extreme wake up call for any author feeling they’re dipping too deep into the void of hating the entire world.