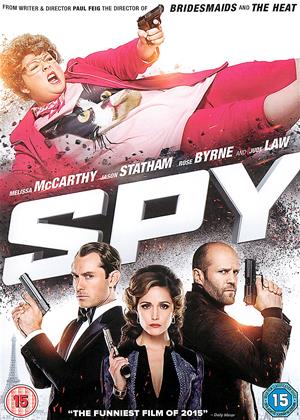 God knows how much this must have cost to make; The locations, sets, CGI, all -star cast, everyone trying desperately to be funny yet somehow it just isn't. Every joke was laboured. Jason Stathan doing a pastiche of his Transporter films could have been witty but instead became tedious, and all the characters resorting to saying 'fuck' every ten seconds for effect made me think "Really? Is that all you can come up with to try and wring some humour from this very, very long film - the end of which was pretty obvious after the first minute?"

When saw trailer thought film was something else. Over reliance on continuous swearing, and the novel use of erect male appendage to gain some notoriety/interest?

Jude Law wasted....as were the others thinking about it.

Great idea, and is quite humorous along the way.

If had Statham doing his smooth Transporter persona, and Melissa complimenting with the slightly gross opposite, could have been really unique. The two of them would have been enough to carry the concept. Much simpler, more funny, and cheaper to make!

This movie is an obvious attempt by Hollywood to get more women on screen, and in a spy movie which is a traditional male arena (maybe y'know because most spies are actually male - most M15 and MI6 staff in the field ARE male, so that is the fact, just like n95% surgeons are male and 99% airline pilots make. Deal with it!). So loads of women characters in charge, some of whom look so similar you cannot tell them apart. Brilliant casting - NOT!

The problem is, it's just not very funny. Really.

I watched the theatrical release version which was shorter - no idea why anyone would want to watch the longer director's cut of this! It's a disposable movie which passes the time. That's all. And so forgettable I can hardly remember what happened and I only watched it 5 days ago!

This is the sort of movie you go to a cinema to watch of a Friday evening because it doesn't really matter if the place is crammed with noisy teenagers - it's a disposable mildly entertaining movie to pass the time. But that's all!

I seriously hope that Hollywood will not continue on its present path of casting large numbers of women in comedies if they all turn out to be this bad!

And I was REALLY annoyed at British actors using American pronunciations of words in this and also vocubulary. It's obviously for a US audience first and foremost (or solely). Fine! They can keep it. I just hope no-one commissions a sequel!

Great Fun - Spy review by (NONE)

I really enjoyed this. It's nice to know that quite junior CIA staff can despatch a lethal drone strike at a moment's notice anywhere in the world without any thought of asking their bosses first. One can sleep sounder in one's bed, knowing that. This is entertainment, guys! Anyone who thinks the real CIA works like this needs their head examined, And a special mention for the super cool villainess who treats her (all-male) entourage like pipe cleaners. But - who is going to pick up all those diamonds?

Melissa McCarthy can be an extremely funny female, but only with the right project. She’s was a waste as the vile credit card thief in Identity Thief and rather unimpressive as the dopey Tammy. Now back once again with writer/director Paul Feig (Bridesmaids), McCarthy is finally being used for all her real worth as an actor. Her weight becomes part of the jokes, but not THE joke. She’s a capable character, but not a Mary Sue. But, most importantly, she’s a laugh riot for a film that requires precise comedic timing and great physical action.

McCarthy plays Susan Cooper, a desk jockey at the CIA who acts as the eyes and ears for field agent Bradley Fine (Jude Law). Though sassy and bashful in the presence of Fine, Cooper is still in enough control to warn her partner of incoming enemies and guide him through interiors with precise timing. Even when a bat infestation breaks out in the office, she drowns out all the noise to insure the safety of her partner (pink eye be damned). She’s the toughest of the gals in the computer pit - quite literally as it turns out given her training. Seemingly content with her position, she is generally looked down upon by her superiors and practically ignored by Fine whom she fancies. But when Fine is killed in the line of duty, Cooper must step up to the plate as an agent tasked with saving the world from bad guys with nukes.

This secret agent satire works rather well since it’s far more than just a base setup for random gags. Paul Feig actually conceives a decent enough spy plot as a base for the comedy. It’s pretty much your standard secret agent scenario with a handful of twists, but the whole premise is capably conceived with sexy locations and thrilling chases around Europe. There’s enough of a story here to be invested in where you’re more interested about what happens next as opposed to what joke is next. The laughs just come more naturally when there is a real arc present.

It’s also a joy to see McCarthy with some colorful characters to play off so she isn’t carrying this movie alone. Miranda Hart plays her English coworker and gal pal Nancy who fills in as her eyes and ears in the field. She’s perfectly portrayed as the well-meaning friend who is ultimately clumsy and frantic with her tall stature. Her energy is just as high as McCarthy’s, but she gets to have more fun as the goofy sidekick who can barely fire a gun let alone hold one properly. Jude Law mostly plays it straight as the hunky secret agent Fine, but he still has his amusing moments.

One of the incredibly amusing additions to the cast is Jason Statham as the wild card rogue agent Rick Ford. Statham really amps up his intensity to an insane degree the way he scowls and grits to the point of insanity. To prove how intense he is, Statham rambles off all of his crazy stunts to McCarthy that sound like a sugar-fueled kid’s vision of the perfect Jason Statham movie. He remarks how he survived falling from the air in a car while on fire (“not the car; I was on fire”). McCarthy just quietly remarks in disbelief at how none of his surviving stunts seem possible.

While Feig has a decent eye for comedy and action, he grows a tad uneven with Spy. It’s kind of cool to see McCarthy start running and gunning like a real secret agent, but she seems far too business for these moments. Perhaps the film feels the need to refocus on the plot, even though it's clearly the weakest element and seems to mostly develop off camera. It’s not a deal-breaker, but certainly a concern as the film’s tone teeters in the third act.

Paul Feig has proven once again that he can not only write funny characters, but make us care about them as well. Spy delivers on what it promises for being a secret agent comedy that satirizes the very genre it celebrates. The action is just as savage as the jokes which just keep landing laugh after laugh. McCarthy is the perfect ingredient as a secret agent hiding in the guise of an elderly cat lady. Her secret weapons include a whistle as a dart gun and a bottle of stool softener containing a poison antidote. Her mouth can fire off more snappy jokes than a machine gun. And she’s quite astute with hand-to-hand combat. She is the tubby female James Bond you didn’t know you wanted.