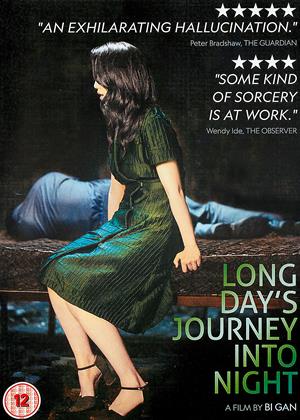 Rent other films like Long Day's Journey Into Night

Good to look at but otherwise empty! - Long Day's Journey Into Night review by TE

The best thing about this somewhat disappointing film are the captivating visual images, some of which are reserved for the famous 59 minute single-take that makes up the second half of the movie.

Apart from that it is a peculiarly unengaging affair. We learn very little about the man on a quest to find his lost love, and even less about her.

Many fine films have used this kind of search for a basic narrative structure, but here it all feels distant and passionless.

It seems as if the director is more interested in the 'look' than the story.

Much of what happens on the screen is cryptic and hard to understand, and there is no strong reason to care enough to puzzle it out.

Worth watching for the visuals, but otherwise: pretentious and cold.

Much to Admire - Long Day's Journey Into Night review by PD

So, if you need anything like a 'plot' to keep you amused for two hours, you need to leave this one well alone, but if you're prepared to simply immerse yourself in artistic beauty, this one from Bi Gan has much to offer. It's one of those that's deliberately bewildering, plunging viewers into an extended dream - meets - subconscious - meets - unreliable memory world in the name of abstract motifs such as memory, time, and space, swimming in artsy references and ostentatious technical exercises.

The first half is very challenging indeed, and I suspect that many will fall by the wayside as a result, but everything (literally and metaphorically) takes off in the second half, with a hugely impressive hour-long continuous take in 3d. There's a voiceover reciting the director’s own poetry, hints of a criminal past and some regret over an old love; the film deliberately, if perhaps rather too self-consciously, evoking film noir by weaving in some fragmented backstory about someone who was murdered, and a mystery related to a gun, but given the wilfully obscure timelines and elliptical dialogue, nothing clear emerges; instead, you just have to surrender to the film’s aesthetics - and some of the cinematography by “Mustang” DP David Chizallet is truly inspired. The sheer range and weirdness of activity, including a surreal ping-pong match and a long, slow plunge down a cliff via a cable-car foreground the difficult and elaborate camera setups.

Bi cites a truckload of artistic references and inspiration, from Chagall to Dante, from Billy Wilder to Modiano (whose short story “Last Evenings on Earth” is chosen as the Chinese title - don't expect anything to do with Eugene O'Neil), although the connections are a tad tenuous, whilst, by contrast, the influence of Wong Kar-wai on the visual style, nostalgic songs, femmes fatales with retro haircuts, the theme of transience invoked by broken-clock motifs, and the staged poses of lovers in a permanent state of aroused but unrequited desire, is clear if perhaps a little too obvious in places; meanwhile, the largely unprofessional cast largely gives us range of standalone emotive facial expressions rather than anything resembling 'character'. Liu Qiang’s production design evokes the recesses of the mind through dark, underground sets like a coalmine shaft, a basement pool hall, and flooded chambers with leaking roofs and dripping walls reminiscent of Tsai Ming-liang locales, whilst, with its ethereal electronic touches, the wonderful score by Lim Giong and Point Hsu contributes most of the dreamlike tone intended. Much to admire here, but definitely hard work at times!