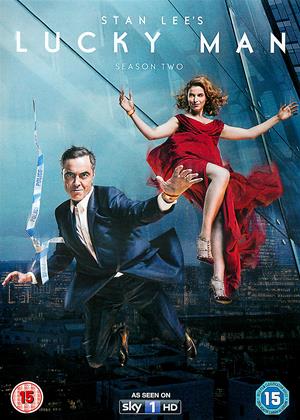 Lucky Man: Series 2 features an excellent plot-line (albeit, far from a ground-breaking one), where fate and luck intertwine to bring the protagonist Harry a whole lot of fun. The main differences between the first installment and the second series are the introduction of a new character (which I’ll get more into later), and probably the additions of more comic book stuff (action, adventure) – as opposed to the dramatic overtone from the first series. And so, Lucky Man: Series 2 continues where it left off last year.

The series continues along the path of certain Harry Clayton (played by the excellent James Nesbitt) – a gambling cop who almost was on the verge of running out of luck. ‘Luckily’, Harry stumbles upon a magical bracelet that turns his life upside down, and promotes luck there where he needs it the most. The only caveat is that, for each event where Harry experiences good fortune – someone else gets his luck stripped away from them (to keep the balance). And so, Harry was torn between the notions of making someone else’s life miserable by upping his fortune by a significant notch. Will Harry finally see his due?

The second series introduces a new character, namely the mysterious Isabella Augustin (Thekla Reuten), who, by a stroke of coincidence – is also a wielder of a lucky bracelet just like Harry wears. This brews new conflict in the mental state of Harry, as he struggles with the notion of someone else having the same lucky bearings on life just like he did. In fact, his life gets challenged as soon as Isabella enters the picture, which makes him re-evaluate the potential usage of his lucky charm and the probable harm that it can bring to other peoples fortunes.

Further, we see how Isabella has a very different relationship with her bracelet as opposed to Harry. She had the bracelet for decades and has grown very intimate with it. She has discovered many possibilities that Harry could only dream of – for the better or worse. The bracelet has provided Isabella with a completely new outlook of the world, one that now she embraces without second thought. On the other side of the spectrum however, Harry is still threading the waters as careful as he could, whilst exploring his own relationship with the bracelet. And everything starts to fall apart in Harry’s world when Isabella tells him that the principle of the fortune balance is nothing but plain old rubbish. With his notions challenged, world shaken, and his old reality torn to pieces – Harry must gather his mental focus to find out the real reality of what has happened ever since he put the bracelet on his wrist.

To conclude, Lucky Man: Series 2 is probably one of the more engaging shows and it would be a real shame if you’d miss it.