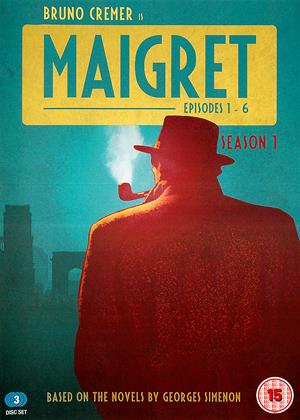 These two episodes channel the Maigret novels more successfully than any of the other adaptions I've seen over the years. However, that makes them rather slow and "literary" rather than televisual or dramatic. [The recent Rowan Atkinson adaptations, which I quite liked, are very fast-moving in comparison.] Bruno Cremer [very convincing as Maigret] is often seen puzzling quietly, chewing on his pipe.

If you're used to the Agatha Christie school of clever plotting and the reveal-all at the end, Simenon's Maigret can come as a bit of a shock. In one of these episodes, for example, we never quite know exactly how the victim[s] died! Maigret is more about him solving the puzzle of character; there are plot points, but they're often subordinate to an interest in the people. This makes the episodes less shallow than many Agatha Christie adaptations, but much less showy. Horses for courses, etc. [I'd except the 2016 Sarah Phelps adaptation of Agatha Christie's "Witness for the Prosecution" from this charge, an adaptation which opened out the original brilliantly and tackled Christie's usual shallow characterisation head-on, turning it into a very satisfying production.]

I'm old enough to remember Rupert Davies striking a match on a dark wall, the glow from his pipe lighting up his face as the titles rolled. I cannot recall if the series was any good, but we've had plenty of incarnations, before and since, French, British, and other nations, of the famous and seemingly imperishable detective.

Simenon wrote something like 60 to 80 pages a day, amassing over 500 works. Reading some of them today it's obvious that any psychology is skin-deep, and pretty thin skin at that. But, like Agatha Christie, it would appear that it is the profligacy of the works, rather than any meaning in the writings, which have earned the posthumous gratitude of T.V. and film companies.

'Maigret In Montmartre' is an introduction to Cremer's style. Quiet, looking like he's taking little in from matter-of-fact question and answer sessions; patient and unfussy. I had read 'Maigret In Montmartre' a few months before watching this adaptation, and I remember throwing the book at the wall when, in one passage, I came across Simenon's mindless homophobia. (It was Simenon's voice, not one of his characters). In this version, the film-makers have obviously had to modify the quandary, and got around it by having a policeman calculatedly throw threatening insults at the man in order to unnerve him, and, in his frightened state, ignorantly lead the police further with their investigations.

It's an adequate episode, with high production values, and Cremer quickly grabs the attention.

'Maigret And The Burglar's Wife' shows a less impassive Maigret, one can see the cogs working more; there are signs that there is a human behind the smoke. The episode has the great good fortune to have Michael Lonsdale as a guest star, and there is one sustained interrogation scene between him and Cremer which is top-notch television on any level, never mind mere cop programme standard.

'Maigret And The Flemish Shop' and 'Maigret And The Judge' have little to recommend them other than those high production values and out-of-Paris locations. 'Flemish Shop' has the luminous Alexandra Vandernoot; and there is a touch of interest in how the Flemish are treated by the locals, (the story is set near the border to Belgium), but the strand is dropped as if it never existed. 'The Judge' shows Maigret losing his cool for the first time, but if that is the only point of interest in 90 minutes worth of film, then it can be considered a flop. The 'Scotland Yard' and 'Scales Of Justice' series from the 50's and 60's have similar stories and take only a third of the time to tell it.

I'll admit to cancelling the third disc, with the last two stories on it. I couldn't bear yet more of Maigret plodding around, looking pensive, while innumerable scenes meander by, adding nothing to the plot, there solely to spin the time out.