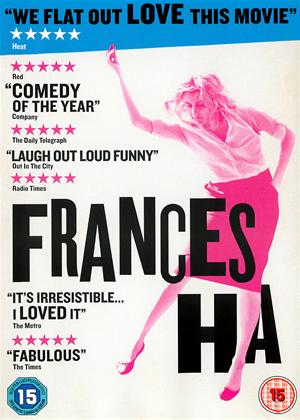 I am most definitely NOT in the target for this film and the chances are you (reader) are also not. It is all about the trials and tribulations of being a 21 year old female dancer living with affluent and articulate artists in New York. It explores every aspect of this in a ruthlessly one directional way. Every job interview, every visit to parents, it is totally boring if you are not engrossed from the start.There is no obvious plot or point. I think it was filmed in black and white to get artistic merit, which it lacks.

So disappointing. This got rave reviews everywhere, but I would describe it in one word: BORING.

It is really just a TV-style soap about 2 best friends living life in Noo Yoik, and mixing with rich kids who are pretending to be artists.

The dancing parts were painful; the psycho-babbling and 'I love you I love you' between the two female leads (who at times seemed to be the mental age of 12) were beyond irritating.

There are a couple of good gags that made me laugh, especially one about a book being 'heavy'.

But really, no more than 1.5 stars for this, just because it is SO tedious and annoying.

The worst excesses of New York pseudo-intellectual claptrap. Could be interesting... but unfortunately not. She can't even dance. Annoyingly, I really like both Lena Dunham and Woody Allen.

Not so much a comedy, more a sad film - Frances Ha review by AJ

I didn't feel as critical as the other reviewers here. If you're familiar with other Noah Baumbach films then you'll recognise his style and won't be surprised. For me though it was really painfully sad in many places. Not a comedy at all. Frances is however stoic to the end and shows us what she can pull off in the last frames. It's painful because it depicts a clumsiness, loneliness and vulnerability much many of us have known at times, even if we might not have phrased in the same "pseudo-intellectual" or "psycho-babble" way the film depicts.

Much acclaimed but actually rather hollow - Frances Ha review by ID

I opted to give this film 2 stars as 'Hated it' seemed too negative a rating with regards to how I feel about this film. Despite much acclaim, it is a curiously unengaging work by a director (Noah Baumbach) who is in danger of riffing on the same quirky terrain with inevitable diminishing returns. Quirkiness has its charm, but as recent efforts by Wes Anderson have demonstrated it can grate in the absence of progression and adopting new ideas and approaches.

As hinted at by other reviews posted here, Gerwig's character's personal and professional predicaments seem hipster niche problems that might indicate that the film has managed to find favour with those privileged enough to relate to them (given the hype and rave notices). However, the level of self-indulgence displayed probably accounts for why it is so difficult to find this film, its characters and milieu at all appealing in any way. For starters, the fact that 'Frances Ha' is shot artfully in black and white cannot hide the lack of an engaging narrative or character at its heart. Its sum total is a collection of scenes that are devoid of the charm and wit to make such a quirky character driven piece like 'Frances' work in the first place.

I came to the film with an open heart and mind, but actually felt quite low in spirits after reflecting on how such a vacuous film had managed to garner such acclaim. Are such films the cultural products we deserve when we accept that style and substance are not complimentary bedfellows?

Tell me the story of us ... - Frances Ha review by Tam

I don't usually read title reviews on Cinema Paradiso but for some reason scrolled down to read reviews for Frances Ha, having watched the movie twice in the space of a week and enormously enjoyed it both times... Well I felt these reviews were nearly all so small-minded and mean-spirited I had to write my own very first review as some kind of balance!

Frances Ha is a wonderful bittersweet comedy featuring a vibrant and affecting performance by Greta Gerwig, in many ways this performance and her co-writing of the witty and penetrating screenplay foreshadows her talents coming to fruition in the excellent Ladybird some 5 years later ... Frances Ha is a coming of age story, as the adult realities of earning a living and a place in the world gradually eat away at the naive dreams and fantasies of Frances , emotionally still a child and struggling hard against giving up her ideals and innocence. It's also an unconventional love story, and whilst frequently very, very funny sometimes has moments of real pathos verging on despair.

Other reviewers have posted negative comments due to the rich, entitled nature of the characters ... Well Frances is not rich, it's made clear her family is neither and those characters who are indeed rich and entitled are explicitly labelled as such in the script, implicitly criticised and openly made fun of. The point is Frances is a lost soul and moving through these worlds she doesn't belong in is part of her journey towards finding herself and a place in life; the job, the home and the friendship we all need.

The film looks gorgeous in its black and white cinematography, a homage perhaps to several other classic New York set movies, and it has a great soundtrack with some exceptionally well placed pop classics ... I can't recommend it highly enough, please watch without prejudice and preconceptions and you may find yourself discovering a real gem.

The title character in this charming and well made piece of cinema lives her life as she dances; with fluid free movements that, though beautiful, are directionless. When her relationship with best friend Sophie (Mickey Summer) deteriorates however the path that Frances (Greta Gerwig) has been following quickly looses stability and she finds herself guideless and searching for a the road back to security.

With an excellent lead performance by the beautiful and vulnerable Gerwig the film depicts the life of New Yorker Frances whose roommate, best friend and intimate confidante begins to drift from her as she develops a romantic relationship of her own. Do not look for shades of jealousy or any suggestions of closeted lesbianism; this is a film about a very deep friendship, and the consequences of loosing that special connection.

Gerwig, who has worked alongside director Noah Baumbach previously, as well as other neurotic romantics such as Ivan Reitman and the ineffable Woody Allen, seems fated to play the lovely girl whose own insecurity constantly prevents her from maintaining any lasting romantic relationships, and her the likeness between Gerwig and her character is even stronger here, thanks largely to the wonderfully natural and emotionally tangible dialogue which she co-wrote with Baumbach.

Baumbach himself compliments this dialogue with some gorgeously evocative set pieces, a painful telephone conversation between the physically and emotionally distanced Frances and Sophie set against the backdrop of a lonely Parisian café and the beautiful but isolated structure of the Eiffel tower lit up against the night sky. Striking images like this, along with the brilliant script and Frances’ own optimism and almost whimsical introspection make Frances Ha an easy film to enjoy.