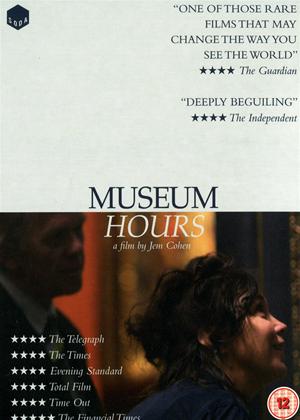 A film with only a sparse narrative that acts merely as an anchor Museum Hours is an exploration of art and history and humanity taken through those very things, the art and history of architecture and museum artefacts and the humanity of strangers and crowds and unknown places.

On the surface Museum Hours is about a Viennese museum attendant, Johann (Bobby Sommer) and a visiting Canadian, Anne (Mary Margaret O’Hara), who develop a quasi-friendship for the brief time in which Anne is in Germany caring for an estranged cousin. However the narrative tells us little else about these characters, Johann spends much of his time alone, though his solitude is not an obviously lonely one, whilst the gulf between Anne and her cousin remains more or less unspoken of. Instead the pair spend much of their time together touring Vienna, with Johann showing Anne his most beloved parts of the city, telling her the history and folklore behind the buildings and areas and even rediscovering places he had long forgotten.

But don’t let this explanation fool you into thinking Museum Hours is little more than a glorified tour guide; there is much more to this film than the mare visuals depicted on the screen; it is the story behind each image that is important, whether it be a painting in the Kunsthistorisches Art Museum or a street seller hawking his wares, each visual is minutely explored, intimately examined and then ultimately set against the sheer vastness of time to highlight the bittersweet nature of the brevity of life.

Director and screenwriter Jem Cohen is known for her depiction of cities and spaces, and often focuses on not the overwhelming electricity of overcrowding and noise pollution but the beauty of quiet moments and often ignored buildings – finding peace in the busiest of places. These same themes are expunged in Museum Hours and ultimately culminate in a somewhat intense but intellectually invigorating and eye opening piece of art that rivals the quiet contemplation of Rembrandts portrait of an old man; questioning, unconventional and powerful.