Rent My Entire High School Sinking Into the Sea (2016) 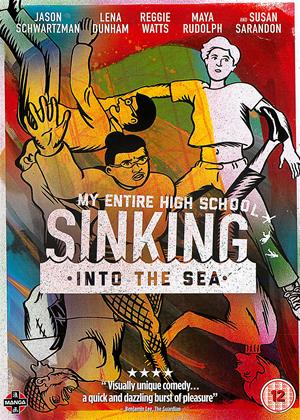 Reviews (1) of My Entire High School Sinking Into the Sea

Weird! - My Entire High School Sinking Into the Sea review by ST

This was a strange film. I watched it with my 9yr old daughter and it wasn't really suitable for her. Quite a bit of gore, albeit in an animation. My 11yr old son said he liked it, probably for the same reason. He laughed at the gory bits more than them being scary.

There are certain animated films that come with grander ambition in visual splendor than a deeper story. My Entire High School Sinking Into The Sea is one of those films which employs a remarkably vivid and alternative style while staged mostly as a disaster movie. But there’s still an oddly appearing quirkiness for the blunt and weird nature, as the type of bizarre dark comedy that Wes Anderson would’ve whipped up in college.

The film starts as an ordinary day at Tides High School. Dash (Jason Schwartzman) is a student feeling good about his social status, having conquered his acne and aspiring to a career in journalism by writing for the school paper. Teamed up with his previous tubby pal Assaf (Reggie Watts), they’re an insightful news team that seeks to improve their writing. But then the editor Verti (Maya Rudolph) takes a quietly adorable romantic interest in Assaf and an odd rift forms between the two friends. Had they not been concerned with their current love triangle, they would’ve sooner discovered that the dangerous design choice of building a school on a fault line and next to the sea was a bad idea that’s about to get worse.

A massive earthquake hits and the high school starts sinking. Halls flood, sharks attacks, and fires break out inside the school that continues to drown and tumbles in the rough waters. It’s a terrifying event but there’s a brilliant absurdity to how depressed and socially focused teenagers respond to danger and tragedy. Take one scene where a popular girl in school begs Dash, Assaf, and Verti to help her escape attacking sharks; she bargains she’ll get them all into a party but Verti argues that parties are not great places to have meaningful conversations. The love triangle bickering doesn’t die even their fellow students are dying around them. Nor does their desire to improve their writing, already pitching ideas for the book on this disaster should they survive.

Director Dash Shaw fills the screen with a beautiful phantasmagoria of sketchy, colorful, and crudely simple design, making great use of all sorts of color blending. The characters all resemble doodles common to the walls and textbooks of a high school, further making the film feel as though it has a stronger relation to its tale of the young, despite a very old cast of voice actors. The backgrounds are a beautiful mix of trippy and psychedelic hues that ripple, collide and divide, adding to the dream-like state of this youthful Poseidon adventure.

Where I think the film doesn’t quite find its groove is in its tone which seems to fluctuate between the intense moments of life and death calls and the sillier aspects of handling the situation in a darkly comedic light. Sometimes they teenagers are racing, swimming, or climbing for their lives in this nightmare of a sinking school, while other times they’re gazing over the dead bodies to only say “they’ll never graduate.” While this never prevents the film from being an absurd treat, it does struggle to find its own vibe. It's still a lot of fun to watch the seniors on the upper floor quickly descend into a Mad Max society over the course of a few hours. Life moves pretty fast in high school.

Shaw’s animated adventure is one of a kind, from the art style to the characters to the bold commentary at the end towards its critics. There’s a brilliant marriage of dark surrealism and stunning animation to fascinate more than any other animated movie out there. While it never quite comes into its own in its peculiar sketching towards the weird, I still found myself intrigued throughout, as though watching a film assembled by teenagers as one of the most ambitious final projects.