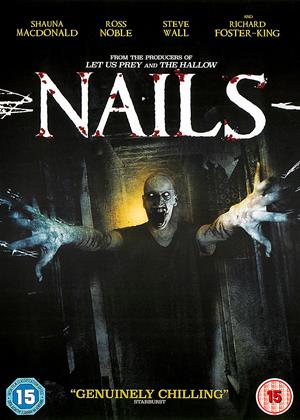 Synopsis:
After surviving a near-fatal accident, track coach and mother, Dana (Shauna Macdonald) awakens, in hospital, paralysed and imprisoned in her own body. Whilst struggling to regain control of her life, Dana is confronted with a vindictive spirit; a terrifying presence called 'Nails', whom she is convinced exists inside her hospital room. Faced with scepticism from her husband, doctors and the staff, and believed to be suffering from a mental breakdown, Dana is left struggling to keep her grip on reality as the targeted attacks grow increasingly violent.
To save her marriage and her life, Dana must find a way to convince her family that Nails is real before he succeeds in destroying her and everyone who stands in his way.
Actors:
Shauna MacDonald, Ross Noble, Steve Wall, Leah McNamara, Charlotte Bradley, Dennis Bartok, Robert O'Mahoney, Conor Scott, Richard Foster-King, Kreeta Taponen, Amelia de Buyl Pisco, Muireann D'Arcy, Trish Groves
Directors:
Dennis Bartok
Producers:
Brendan McCarthy, John McDonnell
Writers:
Tom Abrams, Dennis Bartok
Aka:
P.O.V.
Studio:
Kaleidoscope Home Ent.
Genres:
Horror
Countries:
Ireland

Pretty Weak background story leading to Title of Movie, But not a bad film once you get past that .

Its not Great and for some reason ,someone ,somewhere has decided Unfunny Comedian Ross Noble is now a Horror Actor, shame he cant actually Act....

Drags a bit and as is usual in a Horror movie,all the characters are stupid .No one believes one another, and Everyone thinks the Victim is Going Mad ,seeing things and Ghosts dont exist.

Entertaining enough but I wouldnt bother seeing it more than the once . its not that good.

If you have a bit of a ‘thing’ about needles, hospitals, tubes and, well, nails – or even if you haven’t – there’s a chance this film might really get to you, like it did me.

It’s a really effective little horror story. I say ‘little’ not to undermine it, but because it doesn’t deal with anything apocalyptic or world-threatening. It deals with a family of three, and how the mother Dana (Shauna MacDonald) is subject to a series of horrific night terrors whilst paralysed and wired up to breathing apparatus. I mean, what could be more terrifying than being menaced by something malevolent and truly hideous (‘Nails’ of the title – played by Richard Foster-King – is a genuinely nasty piece of work) when you are completely helpless? This story feasts on that level of nightmare and squeezes every last drop of terror out of it – and it emerges as a triumphant piece of work that had this old horror fan watching behind his fingers at times. It isn’t often that happens!

Not everyone will be as effected as I was – horror is subjective, after all - but for those that are: good luck on getting to sleep afterwards!

The acting is mostly fine with just a few wooden moments, but the pacing and the slow unravelling and revealing of events are near perfect. Apart from MacDonald and Leah McNamara as daughter Gemma – who are excellent – husband Steve is very well played by Steve Wall. He begins as a seemingly decent character, but the way he is played betrays a subtle arrogance that makes sense later on. As mentioned before, there are some moments that are genuinely nasty without being overtly reliant on graphic effects, which are nevertheless very powerful. It is the notion of the horror the story unveils, and the atmosphere of this run-down hospital trying to keep its secrets at bay that frightens.

My only issue is how Nails can be seen. At first we are told only Dana can see him because of an illness she had as a child, then that only she can see him because he cared for her when she was a child. After that, he becomes visible briefly to everyone. Perhaps his influence is simply getting stronger? Also – although he deserved it – why was Steve made a target? His actions had nothing to do with Nails.

Other than that, I really enjoyed this and will come back to it again. You can only feel the utter futility of the character of Dana that first viewing though: she does everything right, risks her life to escape the clutches of the monster, tells her sod of a husband what she thinks of him. Surely, after all that, she’s earned the right to a happy ending?

A word also for the score by Tim Slade and frequent Gary Numan producer Ade Fenton – the soundtrack is available separately and is well worth your time. My score for ‘Nails’ is 9 out of 10.

No subtitles - Nails review by SL

Unfortunately this disc has no subtitles so if you have hearing problems, you can forget ordering this one.