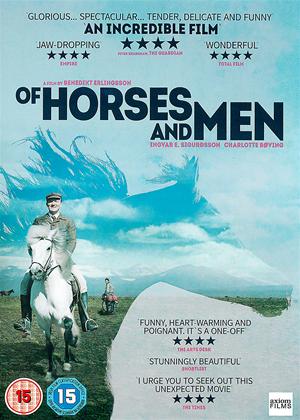 Reviews (8) of Of Horses and Men

Redefining comedy up north? - Of Horses and Men review by DF

Looks like 'comedy' in Iceland is hardly a barrel of laughs. The opening scenes had me puzzled for a while. Is this Iceland? Looks a bit like Co. Roscommon in Ireland and the people (and horses); not so dissimilar. The film, with little narrative or dialogue, tries to qualify psychological links between the irascible horse characters and the rather strange 'hillbilly' human community. At least a link is established in the spontaneous way both species choose to mate! There is a scene where horse whinnies and humans laughing is juxtaposed. Another scene depicting a crazed alcoholic swimming out to a Russian trawler seems, more than likely, to have been based on some exaggerated local legend. Ultimately, the movie is strange, but not engaging and not an encouragement to visit Iceland (or, at least, that part). Like Bjork the chanteuse, such Icelandic artistic endeavour might be 'an acquired taste', but not for me.

This is billed as a comedy - well, Hitchcock considered Psycho a comedy! If you find theatrical deaths and disembowelling of horses funny, then this is a laugh-in for you! It's a tragi-comedy, perhaps!

The plot is as thin as a Rizla - all about some man with a pretty white horse who two local women have their eye on (the man not the horse). A very laboured analogy and metaphor comparing people to horses clunks through the script...

I notice it won a prize in a Spanish film festival - well, maybe because it has a chirpy and resourceful Spanish character!

All in all, this is a weird film - portraying small-town Iceland as a place of oddballs, alcoholics, prim and jealous peasant farmers.

A curio. Worth watching for its uniqueness. I particularly likes the scenes of the Russian ship and the swimming horse...

Remind me never to visit the awful place portrayed in this film, though. 3 stars.

Loved this well crafted funny quirky rounded film. Beautifully shot with great characters, each with a horse related cameo performance which all comes together neatly at the end.

Give it a try! - Of Horses and Men review by SA

The first time I tried to watch this film I gave up after the first scene but something told me to give it a second try. It was well worth it - Iceland is a harsh country where the living is hard and the comedy is obviously dark but the acting is superb, not much dialogue but not needed with the quality of acting. The scenery, the horses are spectacular and if you are looking for a film that makes you think and gives you some understanding of a different culture this is one to watch.

Awful awful awful, do not watch if you love horses, sickening cruelty particularly when horse accidentally falls from ship's platform into sea, cannot believe that this was allowed by governing film body in Iceland

Nearly gave up! - Of Horses and Men review by Cf

We did almost turn this off about ten minutes. Probably the same point where other reviewers have said 'this is sick'. However we did persevere. The stars are the horses (beautiful and such excellent actors ) and the scenery. It is oddball and it grew on us. It was a day or so later when we set to each other 'actually that was quite a good film'. It does make you think that Icelanders are a breed apart. Certainly one we'll remember

Not My little ponies - Of Horses and Men review by CH

A stunningly original and shocking film that teeters on the edge of darkness, but with enough humour to set this film apart from merely gratuitous horror. Nature is red in tooth and claw (and as we all knew anyway, it's grim up North)

Despite some negative reviews, I thoroughly enjoyed this unusual little film. - Of Horses and Men review by DW

A film of 2 hours duration is just right for me so this 80 minutes entertainment felt too short. Another 20 minutes or so filling out the backgrounds to the characters would have altered the dynamics nicely. Whilst the characters were fictionalised for comedic effect the same is not true of the beautiful horses & terrific countryside: they were both just as nature intended. Finding so many suitable actors who are totally at ease with horses was a major achievement. Hats off to the camera men who captured some wonderful scenes of non-domesticated horses., in full majestic flight.

‘Odd’, ‘confusing’, and ‘horses’. These were my first thoughts for Of Horses and Men. After watching the film, not much changed in my opinion. However, there were still elements that really attracted me, such as its short-story-esque narratives. It is also a foreign-language film with English subtitles, making it not everyone’s cup of tea.

Human relationships are hard enough, but when you experience the love for an animal, it is a whole other thing. Of Horses and Men is a combination of different stories that give us an insight into a handful of characters and their relationships with their horses. The stories interlock brilliantly, each exploring the events with a dark-comedic style.

Written and Directed by Benedikt Erlingsson (with a more extensive acting resume than his other works), Of Horses and Men contains witty and intelligent dialogue, with stories and characters that are entertaining.

Not only were the actors brilliant in their portrayals, but the horses were excellent. The latter were not merely props, but often were the main characters, and through whose eyes we viewed the human characters and events. It is interesting to note that the cast all knew how to ride and handle the horses, so all we see of them together is actually the cast and not doubles.

As both an aspiring novelist and filmmaker, I love that Erlingsson has found a way to combine the two in a way unlike we usually see. The film is made up of approximately six separate stories, all with similar themes, but allowing the individual characters to lead in different ways. There is one main story, but the way they all interact with each other is flawlessly done.

The scenery was beautiful and raw, with a true sense of realism. We don’t have the rolling green pastures that dazzle on camera, and instead are shown an expanse both stunning and daunting in its vast emptiness. The majority of the film takes place in the outdoors, and it is clear the connection to nature is also a big part of the characters.

One point I have to commend greatly, is the way Erlingsson introduced each new ‘chapter’. We see the reflection of the character in the eyes of the horses, and while we don’t really view the movie through their eyes, it is a creative way to begin each story.

I will give this warning: the film contains some very unpleasant moments. Not all are what I would call ‘necessary’, and bring down the overall enjoyment of the film.

Despite some of its flaws, the film has received overwhelmingly positive critic and audience reviews.

It is a comedy, drama, and romance all creatively rolled into one, without losing track of the characters and their individual storylines. I am not usually one to experiment too much with films, but that is definitely something this film challenges me to change. It is original, and a film you should add to your ‘must see’ list.