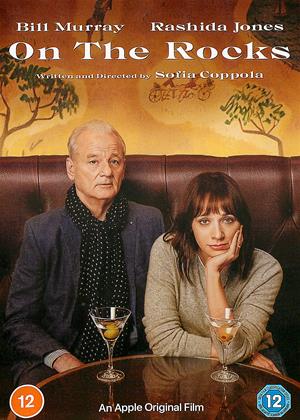 Reviews of On the Rocks

On the Rocks review by Mark McPherson - Cinema Paradiso

Sofia Coppola’s On the Rocks has drawn immediate comparison to her previous picture Lost in Translation and not just for the insertion of Bill Murray into a buddy picture. Her film once more follows the frustrations of relationships waning with time, leading to questioning about how one can keep going on with a marriage they’re not sure about. There’s a moment in Lost in Translation where an aged Murray is asked by Scarlett Johannsson if marriage gets easier with age. He says no at first and then hesitates with a maybe. In On the Rocks, his character would most likely answer no with a smile.

Rashida Jones plays a mother of two with a constantly busy husband (Marlon Wayans). She starts noticing warning signs that he may be cheating on her; finding toiletries of women in his luggage, not being as sexually engaged, and, perhaps the ultimate red flag, he takes off on a trip during her birthday. She’s not completely convinced but asks her father (Murray), a seeming authority to her on men cheating given his experience. Murray’s character is a familiar sort of aged man, the kind who is a constant beacon of energy as much as he a believer in sexist ideology. Since he already speaks of men as being hardwired to cheat on their spouses, he naturally assumes the worst of Rashida’s husband and aims to prove himself right.

This kinda film could’ve gone so wrong so fast as it’s not the first to entertain the premise of a suspicious wife checking up on her busy husband. What keeps it on track is that it never deviates too far into the hysterics a lesser comedy would have resorted towards. This is due to two factors. First, the performances are stellar. Jones gives a perfectly contained performance of an unsure mom, struggling to make sense of her husband as much as she does with her novel suffering from writer’s block. Murray also gives a mildly understated performance, once more showing an impeccable amount of restraint when given the opportunity to sing. Second, there’s a lot of smaller moments to make the situation more real and give it more appeal than the more immediate question of if Jones is being cheated on and if Murray is right.

Yet On the Rocks feels somewhat timid in its tale. There’s a lot of moments where we get to enjoy the back-and-forth of Jones and Murray but their exchanges are fairly predictable in their staging. Murray reaches nearly cartoonish levels of sexism in his dialogue and Jones is meant to either scoff or stand up to her philanderous father. Several of their scenes that don’t strictly keep their eyes on Wayans seem as though they should be sublime distractions, much akin to the detours of Lost in Translation. But somehow they never quite hit that sweet spot chemistry, despite a few smile-worthy moments with Murray trying to put on the quirky grandpa routine, which he, of course, nails with flying colors.

Despite not quite living up to the full potential of such a story, Sofia still delivers a quality film that brims with more humanity than it does simplistic rom-com trappings. It never quite impresses but rarely feels artificial, always maintaining a bittersweet appeal for a dysfunctional family struggling to make sense of their world. Few films of similar assembly ever find that sweet spot of sincerity and heartbreak without feeling hokey and that’s no small feat, even for such a strong cast behind it.