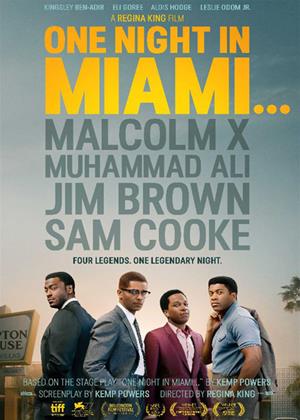 Not released
All My Life

Not released
The Highwaymen

Not released
Queen of the South

Not released
Looking for Alaska

Reviews of One Night in Miami

One Night in Miami poses a very interesting scenario of what would happen if Malcolm X, Muhammad Ali, Jim Brown, and Sam Cooke and gathered together in 1964 for a night of partying and debate. The four figures of African-American culture came about with different perspectives on society and the shifting of civil rights during the era. Based on the stage play by Kemp Powers, the film takes care to let their milling about a hotel room in Miami flow with fine performances delivering palpable dialogue.

An introduction is given to each. Malcolm X, played by a stern Kingsley Ben-Adir, is devoted to his cause of a bitter civil rights battle but still maintains a secure following of those devoted to his beliefs and cause. Muhammad Ali, performed by an enthused Eli Goree, is feeling on top of the world for already being such a champ in the boxing ring, his ego growing as much as his interest in Islam. Jim Brown, acted by an introspective Aldis Hodge, finds himself at a crossroads in his career, deciding between a life of football or acting. Sam Cookie, played by a youthful Leslie Odom Jr., is a rising talent of a singer but questions just how far he can go in such a segregated country.

All of them gather together at the Hampton House hotel in Malcolm’s room, soon after Muhammad Ali’s victory in the match against Sonny Liston. There’s a cause for celebration despite the four men being the only ones at such a small party. The only other character most present are Malcolm’s two security men, played by a refined Lance Reddick and an eager-fan Christian Magby. It seems like a lacking party, especially since Malcolm has rejected drinking to stay true to his faith, offering only ice cream as the treat of the night. No matter. There’s plenty of juicy drama to be had as the four of them spar about what they want for their futures.

All of them bring up valuable views on the current struggle of civil rights in the 1960s. Brown voices his concerns about starring in movies where he’d die halfway through, a prospect Ali laughs at early as he predicted nothing less for a black man starring in a western. Cooke speaks about how well he is doing despite not bringing in the crowds. His music disgusts Malcolm who finds his lyrics empty and meaningless, presented as a mere mimic of songs by white people. He especially stings the young singer by presenting him with a Bob Dylan song about changing times. Malcolm argues how messed up it is that some white rocker from Minnesota was able to compose something far more meaningful for the progress of black rights than Cooke. It’s insulting to Cooke who feels his work means nothing to the movement, stinging all the more when he secretly admits he wishes he’d thought up such lyrics.

With the exception of a venture out to a liquor store and a press conference, most of the film is contained to the hotel, making its play source material all the more apparent. The chemistry between the four characters works rather well, the way they play off each other with such ease. There’s a sense of relief and humor that washes over them when Malcolm’s loud and proud exterior comes down when he fears his expensive camera will break. There are introspective concerns that come spilling out here and there, where Muhammad may not feel as keen on converting to Islam when considering the rule of no drinking. A lot of faith and responsibility feels placed on the shoulders of these four men, leaving them with wracked brains about how to proceed.

This is the directing-debut of Regina King and she delivers one hell of a first film for her career. She has enough faith in the camera to let it linger for several scenes but also showcases some capable staging of knowing when to follow and when to block for extra dramatic effect. What’s most incredible about such a film is how meditative it feels when addressing these figures. Sure, Malcolm’s drive towards black power is the most vocal in the room but there are also shades of his own doubt that come about when he finds himself setting a room ablaze with conflict. There’s a remarkable transition present here that while fictionalized does humanize such iconic people and makes their concerns seem more human than god-like, giving off an inspiring vibe by the end of the picture where the four men flourish in their own ways.