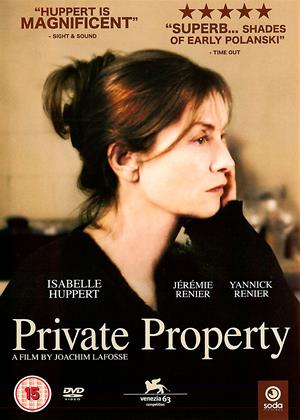 Synopsis:
An old, but beautiful farm in Belgium is home to Pascale (Isabelle Huppert) and her twin sons Thierry (Jérémie Renier) and Francois (Yannick Renier). Although loving and ostensibly supportive of one another, each is still reeling from the divorce that divided the family some years earlier. Now in their late teens, the boys have begun to move in different directions but neither seems compelled to embrace adulthood or the responsibilities that come with it. When Pascale falls in love again and dreams of beginning a new life she finds herself unable to rise from the shadow of her ex-husband and selfish children.
Helpless and in a bid for survival, Pascale leaves the house in the hands of Thierry and Francois, never suspecting that in her absence, a fratricidal war will change their family forever.
Actors:
Isabelle Huppert, Jérémie Renier, Yannick Renier, Kris Cuppens, Patrick Descamps, Raphaëlle Lubansu, Sabine Riche, Dirk Tuypens, Philippe Constant, Catherine Salée, Delphine Bibet, Mathias Wertz, Jonas Wertz, Anton Biral, Jean-Benoît Ugeux
Directors:
Joachim Lafosse
Producers:
Joseph Rouschop
Writers:
Joachim Lafosse, François Pirot
Aka:
Nue Propriete
Studio:
Soda Pictures
Genres:
Classics, Drama
Countries:
France, Classics, Drama

Atmosphere but no content - Private Property review by JD

Scenes would often be static and without dialogue. There was a slow movement to it and sometimes subtle interaction was beautifully acted but it could also be boring and the ending is as pointless as you might expect from the entire film.

Pascale (Huppert) is keeping her family (twin sons) together after a painful divorce. It wasn't immediately obvious the boys were twins as both are quite different in appearances but are played by real-life brothers. Pascale has it hard; the boys have grown into teenagers with hormones. They are selfish and lazy and self-absorbed; she cooks and cleans and waits on them while they mock both her and their remarried father who at least comes around occasionally to visit and gives them money although that seems to annoy her.

I enjoyed the film on the whole as I am into Belgian movies after viewing the hugely successful comedy The OutLaws (Clan) from the Flemish side but this is quite the opposite.

Personally I would have chucked the sons out of the house once they started cutting up rough about her wanting some modicum of happiness with the kindly nextdoor neighbour, and suggesting the sensible notion of starting a B&B business or selling up. The boys seem convinced they have a right to keep the house which they don't and won't be told, and it spirals from there. They moan about money but are seen in nearly every scene consuming large amounts of food. Pascale also seems to be oblivious to raging teenaged hormones as she leaves loo doors open and brazenly showers in full view of one son shaving in the bathroom. Even the very first scene when she's trying on a negligee/ slip in front of a mirror she invites a son to give his opinion. Both boys eye her up subtly then end up crudely joking about their mother's (perceived lack of-) sex life. Francois seemed a bit more gentle and reasonable but Thierry went off the rails for no discernible reason so the ending comes as a bit of a shock but then no real resolution goes on from that, so I've deemed it only 3 star.

DVD from Lovefilm only has English sub titles.

Overall an enjoyable family drama but the casting was terrible.

How old were the sons meant to be. I picked up at one point teenage but they looked about 35.