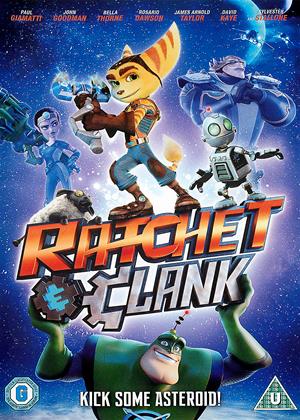 Reviews of Ratchet and Clank

I’ve been here before and yet I’ve never played a Ratchet and Clank video game. The filmmakers seem to believe that those coming into this movie are already big fans of the game series and already know all these characters, except this movie seems to present an origin story for those coming in cold. The movie introduces us to several characters, but doesn’t bother with giving them a proper introduction or develop them much at all between sci-fi battles. It’s a movie that teeters between pleasing fans and welcoming newcomers, but will ultimately end up boring both.

As with video games that eager to get the player into the game, the script quickly glazes over our heroes and their world. We’re introduced briefly to Ratchet, a cat-like alien that is the last of his race, desiring to become a Galactic Ranger. The Rangers are led by the overly-boneheaded muscle Captain Qwark, a cocky and egotistical leader that craves action and despises nerd. You know, a walking stereotype. But thanks to the help of a malfunctioning robot named Clank, Ratchet is able to uncover a sinister plot by Chairman Drek and Doctor Nefarious to destroy planets. He is soon accepted into the Rangers and is off on an intergalactic adventure to save the universe.

It sounds like a solid scenario for a video game, but, then again, what doesn’t? A game about a goat smashing through a neighborhood could be considered a great game as long as its programmed well. And, yes, the same could be said of any movie so long as it has great writing, acting or cinematography. The interesting thing about Ratchet and Clank is that it’s trying to fill both shoes with a story that was simultaneously developed for both a movie and a game. As a game, I’m sure it’s a blast to play as Ratchet piloting a starship or Clank running for his life. But you don’t get that same level of immersion in the movie where the lame jokes are just annoying trimmings - they’re the main course.

Most of the gags for Ratchet and Clank come from the mocking of convention. A training montage is announced before it happens. A clock counts down to ignition of a doomsday device. The expositional subtitles constantly attempts to satirize every introduction. But what’s the point of mocking overused tropes if you’re just going to use them anyway? If you know that training montages are lame, why even use them? Why not find a more creative way to skip over them? It’s as if the movie doesn’t have any clever ideas to get from point A to point B and wants you to laugh at its ineptitude.

And when the humor fails, what’s left to enjoy? The characters are not exactly memorable with razor thin gimmicks of being plucky, nerdy and dopey. Its plot, which the movie relies far too heavily on to carry the movie, is nothing all that original with such an uncreative plan to rule the galaxy via robots and doomsday devices. The animation is competent enough from Rainmaker Studios, mostly known for animating Barbie movies, but nothing all that mind-blowing for being a space adventure that features various planets and aliens.

Ratchet and Clank comes off more as a standard Saturday morning cartoon than the epic space adventure it was aiming towards. Maybe these base characterizations and mediocre attempts at satire were a hoot in the game series, but they do not transfer well to the big screen. It’s enough to make any gamer press the start button to skip past these cinematic scenes and get to the game.