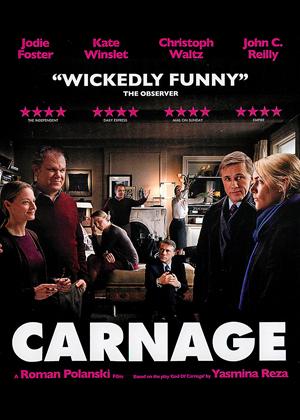 One of those situations where you know the events are gradually going to spiral out of control with all of the characters shedding their careful control to say what they really feel. Would work very well in a live theatre too.. Very funny, if slightly overdone at times.

I only managed to watch about ten minutes of this film.

Jodie and Kate, what were you thinking?!

To begin with, we didn't get a close-up of the incident that sparked this story.

The following scene left me wondering what these two sets parents were seeking.

The mother of the child who had been assaulted apparently wanted the child with the stick to apologise to her son.

The father of the child with the stick insisted his son wouldn't do that. He offered to pay for dental treatment for the injured boy.

This was not accepted.

And then Kate's character threw up all over her hosts' coffee table and Jodie's character started wiping it up.

I switched off at this point.

Has it come to this, Roman? - Carnage review by Alphaville

An utterly predictable chamber piece, totally bereft of ideas or interesting dialogue, about two sets of squabbling parents. So instantly forgettable I attempted to watch it for a second time because I forgot I'd attempted to sit through it a year before. It's based on a stage play and, boy, does it show. Fans of ACTORS may find something here to detain them, but a MOVIE it ain't. No stars.

Two sets of parents gather together to discuss an incident in which one of their children attacked the other after an argument. Their attempt to deal with the situation in a pleasant and civil manner does not last long however as cabin fever begins to set in the Brooklyn apartment and the couples begin to clash.

In this case the plot of the film is almost entirely secondary, the incident that brought the two couples together remaining fairly ambiguous and misread throughout; all that is known is that the children argued and one was left minus a few teeth. It is implied that the children, both boys aged 11, are almost interchangeable in the incident, in reality it was simply an altercation between two children for no appearant reason. What is far more important in this story are the performances of the four actors involved, Jodie Foster and John C. Reilly as the Longstreets and Kate Winslet and Christopher Waltz as the Cowens; the former the owners of the impressive condo and the latter the parents of the stick wielding child.

The adults slowly descend into obscenities, aggression and even petty insults, as their politeness dwindles and their social graces ebb away. The tension is managed meticulously by director Roman Polanski, who changed little from the movie’s original text: the Yazmin Reze play God of Carnage (Le Dieu du Carnage). The movie has a distinctly stage feel to it, taking place is all of about three sets, only adding to the claustrophobic atmosphere of the parent’s meeting.

Carnage is a brilliantly apt name for such a piece, as the movie displays what can only really be recognised as the savage deterioration of a group of upper-middle class parents, whose heightened emotions and good intentions lead to what resembles a modern day bear fight; teeth and claws replaced for snide remarks and sworn insults. An incredibly well made and intriguing piece.