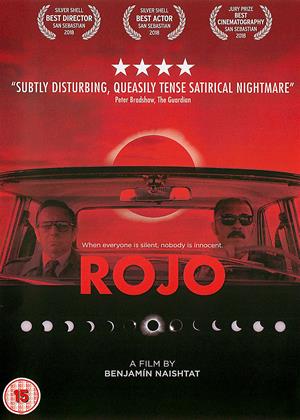 Synopsis:
Claudio is a middle-aged lawyer with a prosperous life in a placid provincial town in mid-70's Argentina, just before the military coup. One night he enters a restaurant where he is verbally attacked by a mysterious stranger, their argument continues on the street outside, and then escalates even more with drastic consequences. A few months later a friend comes to see Claudio about an abandoned house that he is interested in buying. The two incidents come back to haunt Claudio later with the arrival of a Chilean private detective who is intent on locating the missing stranger, who, it turns out, is a relative of one of Claudio's friends. Claudio's life is possibly about to unravel.
Actors:
Darío Grandinetti, Andrea Frigerio, Alfredo Castro, Diego Cremonesi, Laura Grandinetti, Claudio Martínez Bel, Susana Pampin, Rafael Federman, Rudy Chernicoff, Mara Bestelli, Pierre Marquille, Fabiana Uria, Lola Banfi, Myriam Henne-Adda, Martina Mainz, Abel Ledesma, Félix Rodríguez Santamaría, Ulises Guyot, Gonzalo Espinola, Daniel Cabot
Directors:
Benjamín Naishtat
Writers:
Benjamín Naishtat
Studio:
New Wave Films
Genres:
Drama, New Releases, Thrillers

A quietly brilliant film about the use of "disappearance" by the Argentinian military and rightwing militias.

Director Benjamin Naishtat manages to convey the horrors of this period with hardly a gunshot and hardly a glimpse of a military uniform. People disappear, the sun disappears and there is a tangible sense of sinister encroachment on normal life.

The links with events in Chile at the same time are made via the presence of a reptilian private detective from Santiago.

Most of all the film peels back the layers of 'acceptable' society to reveal the collusion and the corruption that will haunt the protagonists forever afterwards.

There is nothing spare or unattached to meaning in this film, every image is weighted with dark significance.

A dark, allegorical thriller from Argentina - Rojo review by PJ

This is a good film, full of symbolic meaning about individuals and families 'disappearing' in Argentina, in the mid-1970s, right before the military coup that took place in 1976. The conformist, well-to-do, bourgeois classes of provincial Argentina are keeping quiet, while all of this is taking place, and getting implicated rather more than they would like -- willingly or not. There is a leaden atmosphere of fear and foreboding in the movie.

The film is well shot and does have the feel of the 1970s about it. The acting is good throughout, and highly convincing. The plot itself is quite simple, in fact, and rather linear. In conclusion, I found it is a good film, but it is also slow, and even very slow in places. This contributes towards creating this somewhat sticky, claustrophobic atmosphere that dominates the film. So, it is a good film, but perhaps not quite as remarkable as many critics have claimed.