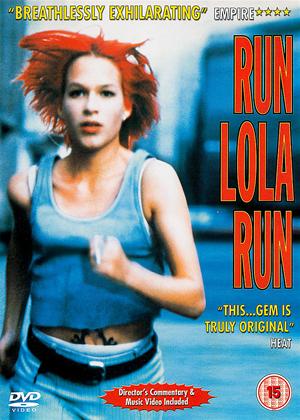 The plot of 'Run Lola Run' revolves around the character of Lola whose boyfriend is supposed to transport 100,000 Deutschmarks to a local gangster, but somehow manages to lose the money. In a panic her boyfriend phones her to say that if he doesn't give the gangster his money within 20 minutes, he will be killed. Immediately, Lola sets off running through the streets of Berlin in a frantic quest to locate the lost money. The twist is that Lola's 20 minute journey is shown three times, with each journey producing very different outcomes, determined by minor events that happen to Lola as she runs. This frantic, thriller starts at breakneck speed and never slows down, and is one of the most involving and stylish movies I've seen in a long time. The diverse visual style of the film cleverly switches from black and white, to animation, slow motion, fast motion, still shots, split screen and is amazing to watch. The film also cleverly shows how the smallest of events can have enormous consequences on not just ourselves, but also everyone around us. If you're looking for an exciting and unusual, action thriller then 'Run Lola Run' is a must see.

A modern and original German film. In some ways like Sliding Doors in the way that it focusses on small actions that can effect the path that your life takes. When the first scenario finished, my boyfriend told me that the film was only 30 minutes long and that was it! Glad it was longer.

I've never rented a German film (with English subtitles) before so this was a bit of a risk. However, the film is great, if you've ever been to Berlin you'll appreciate the location and the acting / story kept me gripped till the end.

It's in German, with subtitles. But don't let that put you off - it's a rather good film about different timelines or alternative realities.

The film shows the same events happening three times, each with subtle changes and a different conclusion as Lola (Franka Potente, perhaps best known for her role in 'The Bourne Identity') attempts to raise 100,000 DM (the film was made before the introduction of the Euro) to save her boyfriend from the gangland baddies.

But this gangland plot about the boyfriend is secondary to the storyline about the changes that minor events bring, namely the subtle timing changes caused by Lola's encounter with a dog on the stairwell as she sets off running. And it is these minor timing changes that cause the sequence of events to change in small but very significant ways.

I've also recently seen and reviewed 'The Butterfly Effect' and the theme that small events can trigger future changes is common between the two. Another film with a similar theme is 'Sliding Doors', although there are only two alternative scenarios there.

'Run Lola Run' is excellent, and it has the added advantage of being short at only 76 minutes. 4/5 stars. Recommended.

[Aside: Lola's boyfriend Manni is played by Moritz Bleibtreu who played the central character Tarek Fahd in the psychological drama 'Das Experiment'.]