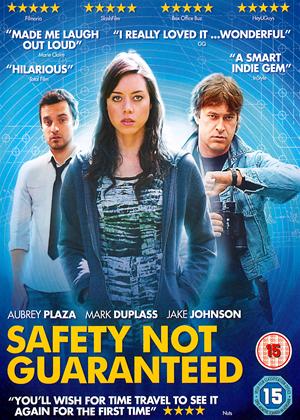 Reviews of Safety Not Guaranteed

It’s hard to imagine the man behind this indie sleeper is the man behind the cameras on the next Jurassic Park film but judging by the interesting and heartfelt approach he brings to his characters shows through in that then I’m sure it will be one of the best in the series.

Safety Not Guaranteed follows Darius (Aubrey Plaza) an intrepid intern for a popular magazine sent to investigate a story with self absorbed reporter Jeff (Jake Johnson). The story is about Kenneth (Mark Duplass) and his crazed notion that he can travel back in time. When Darius comes to him looking for a story she comes to understand Kenneth for who he is while she attempts to write the story.

The film isn’t the twist and turn based thriller, there are no car chases (except for a particularly funny stakeout), no real fight scenes and minimal gunplay, it’s really a demented love affair, a coming together of two equally distant and lost people under the guise of one insane plan. Not only is it kind of endearing, it’s hard not to find something special in achieving the impossible.

Plaza is a stoic yet empathetic lead, a smart ass stuck in a loveless job looking for a little bit of fun, of something different. Plaza plays Darius’ insecurities so that her understanding isn’t overstated, you believe her conviction. Johnson is equally impressive as a man in the middle of a mid life crisis only he didnt even know he was having one. He gives new light to this relative youngsters belief in his own obscurity.

The film never overplays its quirky hand though as the story leads the characters but never defines the emotions and actions they experience. The best parts are when the semi sci-fi premise slips away and the characters just breathe together. A moment when Darius amd Kenneth slip away into the woods is one of the films finest sequences of the film. All in all Safety Not Guaranteed is a liberating film with plenty of soul making it a good light hearted romp with some undeniably funny surreal comedy