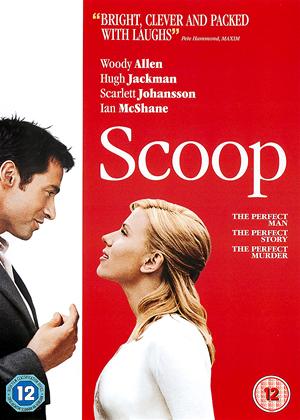 Twin of the film Match Point - Scoop review by CSF

Woody Allen is good at any genre he attempts. Scoop reminded me very much of March Point and yet it is not the same story at all. Still, both are griping, stylish, silly, exciting. The ending is neither bad or happy, just satisfying.

My favourite of Woody's London trilogy. It is a supernatural comedy thriller with Scarlett Johansson as a journalist who is vanished by Woody Allen (as Splendini) at a magic show.  During the trick, she encounters the ghost of a dead newshound who tips her off about an aristocrat (Hugh Jackman) who may be the Tarot Card Killer, the serial murderer of sex workers in London.

Aroused, she sets off in pursuit of/falls in love with the titled maniac, with a reluctant Woody in tow posing as her father. Scoop wasn't allowed a cinema release and later debuted on tv. The critics laid waste and announced that Woody was finished, though it's the film after one of his biggest hits, Match Point.

The script is only so-so, but where it scores is with the chemistry between Johansson and Allen which is infectious. She is sensational as a screwball girl reporter. Their comic rapport recalls Woody's partnership with Diane Keaton, many years ago.

The director said he was going for a feel like the Thin Man films of the thirties with Nick and Nora. Well, he doesn't really get that because this is across the generations, and Splendini is a coward. It's more like a good Bob Hope film. There is a lot of genuine suspense for a comedy thriller. Scoop is a lot of fun, and it looks a knockout too.