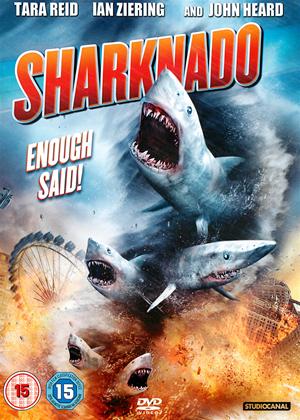 This is the sort of film Stephen Spielberg would have made if he'd been dropped on his head as a baby.

It's a real special needs, silly, shameless mash-up of disaster movies and Jaws (which it references in some lines).

Funny to laugh at and with. Happily, nice and short too.

This was way more enjoyable than many Hollywood movies that cost 100 times more and think they are profound and high quality. Hence the 3 stars.

Sad to see so many sharks getting killed though, even though the special effects are in some cases utter CGI pants and knocked up on the cheap on some Korean computer. Hilarious too that they use the same footage of a real shark over and over!

The film starts well - with a scene showing shark finning and a Chinese man hiring a boat to kill thousands of sharks.

Let's not forget the scandal of shark finning - whereby sharks are caught, get their fins sliced off, then are thrown back in the ocean alive to die horrible deaths - all to satisfy Chinese demand for shark fin soup - which tastes of chicken broth because shark fins actually have no flavour at all.

Up to 90% of large sharks have been killed in the last 20 years because of this vile trade. Maybe the sequel to this film could have Chinese people sucked up in a tornado and killed by sharks in revenge? That's be fun - and poetic justice.

I can't stand the way some people think they can go around the world wiping out endangered species - or as the Chinese call it, 'lunch'.

Sharks are really not the threat and kill so few people, and mostly silly surfers who are irresponsible. People are the dangerous species. Not sharks.

There is a charity and campaign group called Shark Trust, by the way. They do good work.

The plot, script, acting and effects of this film are appalling. So appalling in fact, that it goes past 'awful' on the dial and comes back round to 'entertaining'. If you don't mind enaging your willing suspension of quality (as well as disbelief) watch this film for a giggle.