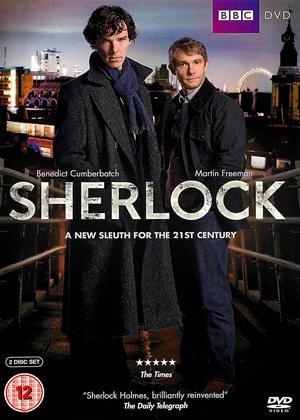 I really wanted to give this five stars, because the first episode is an absolute cracker! Benedict Cumberbatch is perfect as a modern Sherlock Holmes who embodies just about every character trait the original had, including the negative ones that tend to get left out of most adaptations, infinitely better than Robert Downey Jr. ever did in Guy Ritchie's ludicrous films. You really believe that this man is smarter than everybody else in the room, and possibly the world; but you also believe him without question when, in reply to an accusation that he's a psychopath, he points out that he's actually a high-functioning sociopath, which isn't the same thing at all. This is a brilliant, brittle, dangerous Holmes who genuinely needs somebody like Watson to stop him going so far that he destroys everyone around him, including himself.

And Martin Freeman, firmly established as the go-to actor if you want a thoroughly decent, brave everyman trying to pull his weight in extraordinary company, is just fine as a 21st. century update of Dr. John Watson, a character too often played as an idiot because he tends to look like one on account of constantly being in the company of the world's smartest man. Also, the story is excellent. The numerous references to Conan Doyle's source material keep the real fanboys happy, but don't play out in the same way at all, so knowing how the original story ended isn't a spoiler. Plus there's a truly chilling baddie, who almost deserves it when Holmes pulls a shockingly brutal move I last saw employed by Dirty Harry.

Unfortunately, the other two episodes can't keep up the standard. The middle one in particular has what Roger Ebert dubbed an "idiot plot" - almost everybody except Holmes has to behave like a complete moron in order to justify what happens, especially the ridiculous Oriental villains, who do everything in the most inefficient, convoluted, and self-defeating manner imaginable, and seem to have escaped from a Fu Manchu story set at least a century ago, or possibly a Roger Moore era Bond movie. Also, Holmes does surprisingly little brainwork, and far too much poorly-choreographed martial arts mayhem involving people of various ethnicities who all look as though they've strayed into the wrong TV series.

And alas, the final episode - since there are only three, you'd think they could have kept the tone consistent - only partially returns to the standard of the first. Holmes is at least thinking again rather than wrestling fancy dress ninjas (though a seven-foot-tall Batman villain does pop up for no discernible reason), but the plot bears a far too obvious resemblance to a certain Bruce Willis movie. And the climax, which introduces a tremendously important character whose arrival we've been looking forward to all along, is utterly ruined by possibly the very worst piece of horrendous overacting I've ever seen in my life! So overall, this would have been perfect if only it hadn't kept going off the rails. But even so, it's well worth watching for the bits where it really does work. Remember to pick your jaw up off the floor at the end of Part 3.