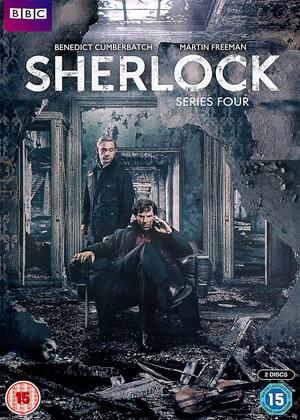 Sherlock has been many things during the past years it aired, ranging from heart-breaking drama, all the way through self-deprecating mumbo-jumbo and ending on an enthralling note that, most often than not – has proven to be the apex of the series. Now, Sherlock: Series 4 is all of that times ten, with intertwined storylines that don’t quite work as often as the pen behind them envisioned it. Still, the fourth installment offers (some) thrills and a captivating tension that loosens up as the story unravels forward to unexplored territory.

Is it better than what preceded it? Probably not, but then again – so are most shows with more than 2 seasons tops (thinking of you, LOST!).

Sherlock: Series 4 proceeds where it left off: this time, the greatest detective in the world inhabits a world where everyone carries the Anglo-Saxon lineage (is white) and where murders get forgiven as simple as getting a paint job after a grand larceny in GTA V. The crime Sherlock and his Watson have to solve is a rather bizarre one: a certain someone has been continuously breaking into other peoples’ homes and destroying busts carrying the Margaret Thatcher legacy. Of course, besides everyone in the Islands hating on her, those effigies prove to hold something valuable inside of them – thus the crime of marble passion.

Furthermore, it seems as if scribe Mark Gatiss forgot what made the series great in the first place. The wordplay between Benedict Cumberbatch’s Sherlock Holmes and Martin Freeman’s Dr. John Watson is reduced down to a meaningless banter which adds nothing to their conflicting stances on several issues. And up until (SPOILER ALERT) Mary Watson’s death, they were continuing to nurture the same friendship that will (later) drive them apart.

Another subplot that fails to deliver is Watson’s unsung flirtation with a certain Bus Lady that is completely out of his character. This character trait comes off as highly inappropriate in regards to his wits and manners in which he holds his persona, and is quite unbelievable, if not downright ridiculous to have happened in the first place. In the particular scene, Watson, a middle-aged average gentleman by all means, is approached by a hot lady in a bus which gives up of her number quite the easy way. Watson, the heartthrob he isn’t, fails to follow through and his feelings start going crazy in a not-so Shakespearean twist that confirms the lack of ideas among the screenwriter tribe.

As we near Sherlock: Series 4 finale, the chemistry that drove the main duo’s partnership seems to fade away into oblivion. Even the actors seem to be well aware of this and start to phone their lines a bit. What made the series great in the first place is nowhere to be seen.

Will the series pick up its lackluster continuation as of now? Only time will tell.