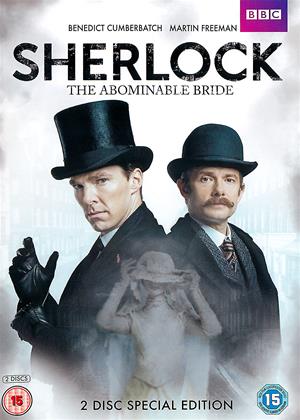 Reviews (1) of Sherlock: The Abominable Bride

The sad thing is, he was right. Thanks to a contrived plot-twist you'll probably see coming long before it's revealed an hour into the tale, this is a ludicrously over-the-top parody of Victorian times, featuring endless clumsy in-jokes, lots of those flashy "look what we can do with computers nowadays!" visual effects that are mostly both distracting and unnecessary, and a desperately unsubtle tub-thumping feminist agenda because anything the BBC spends money on these days has to include lengthy sermons about various types of prejudice being wrong, no matter how much they get in the way of the plot.

We're also treated to the supporting cast going all meta and complaining about their fictional portrayal, Mycroft Holmes as a slightly thinner version of Mr. Creosote from "The Meaning Of Life", attempts to lampshade the silliest aspects of the story by having the characters admit they're silly, and of course Moriarty. Andrew Scott, the world's worst actor, once again portrays the Napoleon of crime as Graham Norton's evil twin, and repeatedly reminds us, whenever he isn't too busy pulling pantomime scary faces and randomly licking things, that although he's most definitely dead, he'll nevertheless be popping up regularly to ruin every episode he's in for as long as the BBC continues to make "Sherlock".

What started out as an excellent modern adaptation of one of the most iconic characters in fiction almost immediately began to drift into self-parody, and has now jumped the proverbial shark. Like the new "Doctor Who", it's up to its eyebrows in excess baggage that's been tacked onto a perfectly good and very straightforward franchise in an attempt to include something for everyone and thus sell it to the largest possible overseas market, and still they're finding new, ever more absurd ways to furtle around with it. Perhaps the writers know they're going to lose Benedict Cumberbatch unless "Doctor Strange" is a dismal flop, so in the time they've got left they might as well try out their craziest ideas. Whatever. After two very short series and one Xmas special it's already not as good as it used to be, and as of now I won't be wasting any more time on it.