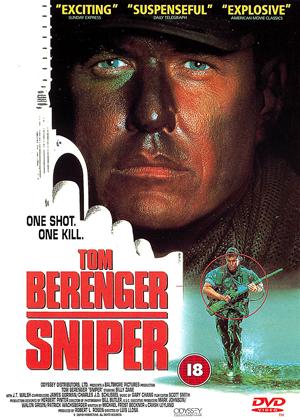 In it's British (incomplete) version, this is like rating a book with the ending torn off. - Sniper review by BG

Luis Llosa's 'Sniper' was a cheesy 'anti-buddy' action flick with bravura action scenes and a silly but tense ending.

As a steely experienced marksman, Berenger has to guide a flaky new shooter to an assassination job and ensure the mission goes off without a hitch. Unfortunately his new charge (Billy Zane) has major issues with killing a real human being, and it becomes a battle of egos, mental strength and survival as things go badly off course and they have to run for their lives from determined adversaries.

This British edit strips out the flashy 'bullet-path' special effects that gave the original release added punch, and, as the worst of several snips, completely amputates the ending, removing an entire final confrontation scene. As a result this is rather like getting to the last ten pages of a book and finding them missing. It's a lamer, less impressive movie all around as a result. Don't even bother. If your player can handle Region A, try to get the more complete U.S. edition.