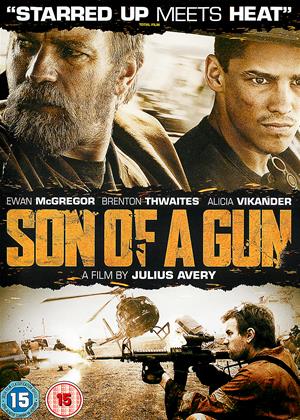 Blimey. Ewan does a good turn. Quite plausible hard case in this one. Simple and inexpensive film that has good edge to it. Bet the half billion US blockbusters must wonder what they up to sometimes.

Good chemistry - Son of a Gun review by JD

The 3 main actors Alicia Vikander, Brenton Thwaites and Ewan McGregor have a very complex and dynamic relationship requiring great acting. They pull it off brilliantly. There is tension and meaning in each glance. The complex story of trust and betrayal is beautifully crafted. If there is a criticism it is the violence. Quite a lot and very brutal. I always find it strange that one glimpse of breast causes the censors as much distress as watching a man stab himself to death in the neck with a sharpened toothbrush. I think this should be 18 rated for violence but there you are. Anyway apart from violence awesome story, direction, everything.

Soporific thriller - Son of a Gun review by Alphaville

Lo-key Aussie thriller lacks life. More of a naturalistic procedural about baddies escaping jail and stealing gold. Nothing we haven’t seen done better many times before. Brenton Thwaites is a charisma-free lead. The soporific score, with saccharine muzak for the romantic subplot, is a metaphor for the whole enterprise.

Son of a Gun review by Michelle Sommerville - Cinema Paradiso

From beginning to end, Son of a Gun is an exciting tale. Now, I’m not just saying this because I’m proud of this fellow-Australian production, but because it really does draw you into the story and entertains you. I give it four out of five stars, and would highly recommend it to anyone of-age.

Son of a Gun tells the story of JR (Brenton Thwaites) - nineteen years old and already in prison. Prison life is not a good life, and it’s not long before JR needs protection, and that comes by Brendan Lynch (Ewan McGregor). A notorious criminal, Lynch of course wants something in return, and recruits the young man as his criminal protégée upon his release. But when you’re surrounded by criminals, you quickly learn that no one can be trusted. Things go from bad to worse, and it doesn’t take long for mentor and protégée to come to blows.

When it comes to reviewing a film, you must look at a combination of elements - how well they act independently, and how well they mix together. One of the most important, but not the only element, is the story. Son of a Gun definitely has numerous similarities with other films of this genre, but it shouldn’t detract too much from the overall enjoyment.

The acting in this film was excellent. I’ve never been a Star Wars fan - cue the gasps - so I wasn’t hung-up on Ewan’s performance. While he was very good, the film was clearly dominated by now-26 year old Thwaites. Since beginning his professional career back in 2010, he has landed bigger and better roles, and this ranks high among them. Alicia Vikander also did a fantastic job, and brought a much needed feminine element to the cast.

The more technical elements of the film - action and fight choreography - were near-flawless. I don’t know too much about fight moves and car chases, but it was entertaining, and that’s what you want first and foremost.

Along with the directing and work of the actors, the writing was as excellent. Dialogue was believable, the story progression were cogent, and character arcs were compelling.

From grimy drug houses, to a mafia boss mansion, all locations in-between. The set decoration for this film was brilliant, and it is great to see it being done in Australia.

Son of a Gun has done average in terms of audience and critic online and in-print reviews. While most seemed to like the acting and story, others have pointed out its implausibilities and its apparent inability to hold a candle to similar films in the genre.

Its violence, adult language, and sexual content make it unsuitable for younger audiences, but it does add to the story. Overall, it is a great Australian production and one I would recommend to anyone.