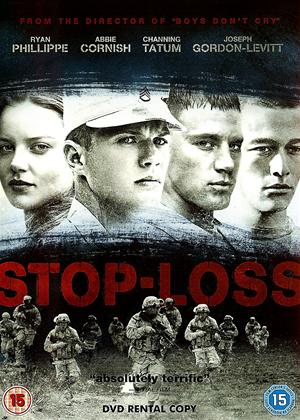 I watched this just after 'American Sniper' and am able to compare and contrast the two films, both of which deal with the effects of claustrophobic, deadly urban warfare in Iraq on US troops, leading to post traumatic stress and the breakdown of relationships.

Both films attempt to give a realistic depiction of coming under enemy fire and - as a civilian - I think they succeed. But where 'American Sniper' is well directed but ultimately long, dull, and too American, 'Stop-Loss' is competently directed, short, and involving - it's also very American, but this aspect becomes part of the drama rather than a distraction.

Apparently when you join the US Army you enlist for an 8 year term, 2-5 years on active service followed by the remainder as a reserve. "Stop-loss" occurs when the initial term of active duty is extended longer than expected.

The film depicts a team of soldiers led by Ryan Phillippe who are ambushed and come under gunfire and rocket propelled grenade attack, suffering death and serious injury. During the short battle a civilian family is killed by a grenade. The story then moves to the Texan hometown of three of the characters, where two are decorated. None wants to return to active duty and are looking forward to settling down, getting married - the usual things. There is a 'welcome home' parade and party. Things go wrong, post traumatic stress kicks in, too much drinking, breakup of relationships etc - and when Ryan Phillippe's character returns to base to be formally discharged he is told that he has been "stop-lossed" and is to be posted back to Iraq.

Clearly this is a drama and the details of how "stop-loss" works and what happens to a soldier going AWOL are probably unrealistic, as are the urban warfare scenes. They're there for dramatic effect - but they work very well. There is an immediacy to the film, there is sympathy for the lead character as he struggles to come to terms with the fact that the actuality of the war he is fighting is not one he was expecting, and sympathy for the loss of his friends and comrades, and the self-blame he feels and the stress he suffers.