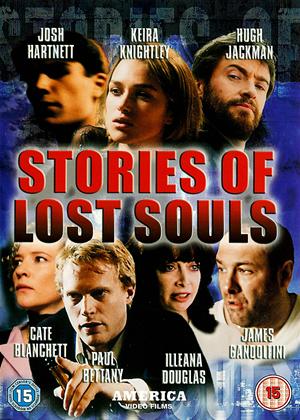 Synopsis:
What defies expectations leads to the unpredictable. 7 short stories of conquest, desperation and the will to overcome.

The Same
A creepy house. Every night a dwarf awaits for his beautiful neighbour to return. He will do anything to win her, including one terrible crime.

Standing Room Only
A group of obsessed fans get more than they bargained for on the last night of a show. The tables are turned as this all star cast wait outside on the street for an appearance from their idol. For one Hugh Jackman isn't inside on the stage but outside in the London cold.

Supermarket
There is no business like show business. Today in Hollywood even actors like Jeff Goldblum and Daryl Hannah are turning to any stage they can find. Including their local supermarket.

New Year's Eve
A beautiful underage girl seduces an older guy to the disapproval of his conservative friends. Even the most apparently dull party can offer up a few surprises on New Year's Eve.

Bangers
Something strange occurs when a woman with a hyper imagination cooks for her mother.

Reviews (1) of Stories of Lost Souls

Want action and visual spectacle rather than a strict history lesson? Then 300' is the film for you. From the same stable as Sin City, the film uses a mix of live action and CGI to bring the Battle of Thermopylae vibrantly to life in graphic comic form.

The opening shots set the scene effectively, introducing the harsh tradition that formed the Sparta warrior, as well as foreshadowing events to come. Gerard Butler is an imposing as a cartoon version of Leonidas, King of Sparta. Convincing despite the incongruous Scottish accent, he leads his select band of Spartan warriors to certain death and a place in history as they hold off the might of the Persian army to save their homeland and the whole of Greece.

This is not a subtle film. Nor is it aiming to be historically accurate. Motives are not analysed. The action is all. Each side is clearly polarised and effectively so. The Spartans, worryingly underdressed for the battlefield and unprotected save for their helmets are portrayed as witty, brave and properly heroic. The Persians, on the other hand, are suitably depraved as befits the dark side; either sinister or effeminate. Xerxes is portrayed as an effeminate tyrant with a penchant for body piercing. His henchmen are dangerously sinister bullies.

Atmosphere is beautifully created with light, golden scenes for an idealised Sparta whilst the advent of war is signified by darkening stormy skies of black and red. The fight scenes are stunning; beautifully choreographed at all times. The slow motion sequences are so elegant that at times it is as if you are watching a type of ballet rather than a scene of carnage. Somehow, this softens the violence, making it seem less gratuitous than if the battles were all out and dirty looking. Certainly it makes it much more watch able.

Whether you buy or rent, 300' is well worth a watch or two. Don't expect to be particularly emotionally engaged or cerebrally challenged. Do however expect to be entertained. You will be carried along effortlessly by the spectacle of it all and who knows, you may learn a little about history too.