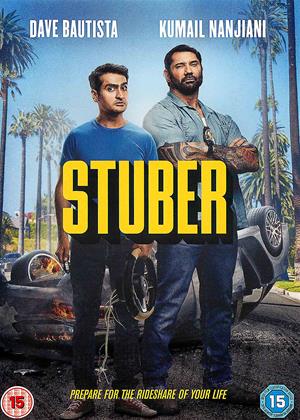 Entertaining enough for a Stupidly Obvious Comedy Movie ,Lots of Slapstick and Action when a Cop Hires an UBER to Fight Gang Crime.

Only more so as This Cop is Blind. all be it Temporary after Laser Eye Surgery .

What could possibly Go Wrong ?

Possibly the worst film i have ever seen. Desperately unfunny and mistakes shouting swearing and violence for humour and entertainment. Avoid.

Kumail Nanjiani was so good in The Big Sick I thought this would also showcase his comic talents, I was clearly mistaken. The script is almost non-existent and swearing & shouting does not substitute actual funny lines. Dave Bautista struggles with a dislikeable character and clearly Karen Gillan agreed to appear as a favour to her Guardians co-star.

Well worth the wait to rent this a five star a laugh a moment really enjoyed this movie a must watch Comedy Action Entertaining all in one So enjoyed this Dave & Kumail was great in this movie So Excellent.

Stuber is the buddy action picture that pretty much comes as advertised. Take one hard-boiled cop and pair him up with an underdog who has never fired a gun. Throw them both into a situation where they’re trying to stop a criminal with conspiracy twists thrown in for good measure, despite being completely expected. We’ve seen this type of film time and time again, but I’m not going to be writing about the expected elements. Complaining about such construction is as pointless as demeaning a romantic comedy for ending with the two leads falling in love. What matters most in this type of film is how great the character chemistry is to balance all the expected theatrics. And, despite seeming expected from these actors, they work their stuff well.

For the cop, we have Dave Bautista filling out the role nicely. He’s a troubled cop who can’t connect with his artist daughter and is obsessed with catching an elusive and violent drug dealer after losing his partner in the line of duty. For the underdog, we have Kumail Nanjiani playing a loser who not only works as both a sporting goods clerk and an uber driver, but finds himself harrassed by his boss and constantly teased by his female business partner who he has feelings for. When Bautista finally has a lead, it comes at the worst time. He has recently had laser-eye surgery and his daughter has an exhibit opening. He enlists Kumail to drive him, but this also comes at the worst time as it seems Kumail might be coming into some rebound sex. Both are working against time and their feelings.

Their journey is nothing all that unique, going down alleys all-too-familiar. Some of the hilarity in these scenes are fun, sure, but you can see their intentional construction coming a mile away. For example, Bautista and Kumail will at one point venture into a male strip club to get some criminal info. Naturally, Kumail must answer a call from his crush here and it must be a video call; if it weren’t, how could their not be the absurd scene where a well-endowed stripper strolls across the background? Kumail will be handed a gun at some point and he will shriek in terror when he fires it, only to try to act tough later on with a faux intimidation speech meant to be equal parts goofy and gruff.

There are a few surprises layered throughout. More slapstick is in store for Bautista with his eye surgery hindering his vision, leading to much misinterpretation and stumbling, giving more flaws to the well-built giant. Kumail gets to showcase his strengths greatly in a scene where he intimidates a gangster by threatening to muddy his Twitter feed. Most of these moments are small, however, as the bulk of the bigger laughs come from the bickering and banter of the two leads. Kumail provides some perfect commentary here and there that takes note of how inept and brash Bautista is, mistaking toughness for cruelty.

There are not a load of huge laughs within this buddy picture, but I never found myself without a smile throughout. I did have a few laughs at the car chase where Kumail chucks a propaine tank at a car with a result that caught me off guard. There are a lot of moving parts in play and the pace is kept quick to never slow down too much to reveal all. It does exactly what it promises and on that level its a pleasing picture for coming as branded, if little else.