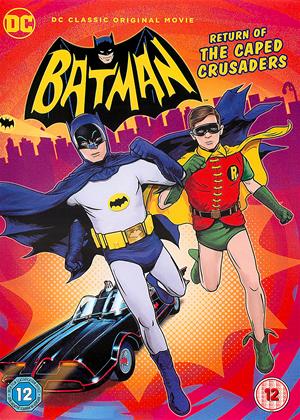 Reviews of Batman: Return of the Caped Crusaders

There were many directions one could have taken with an animated adaptation of Batman’s 1960s program. Warner Brothers could have made it a joking ode, winking and nudging its way through a silly Bat-plot of cowls and criminals. They could have taken an alternative route with darkening up the groovy atmosphere for a shift in the antics. But there’s nothing but affection in Return of the Caped Crusader, a film that aims to be the ultimate 60s Batman movie that never had the budget.

Adam West and Burt Ward returned to the roles of Batman and Robin with a wholesome and imaginative presence, fitting how they were once seen on television. Batman is a paragon of virtue and prep, able to foresee everything from gravy traces in tinfoil and still obey the laws of the crosswalk. His young ward, Robin, is still a plucky and inquisitive lad, seasoned enough to catch up with Batman’s insanely keen deduction skills. All their familiar foes are back to cause mayhem in Gotham; the jovial Joker, plunderous Penguin, rascally Riddler, and confounding Catwoman have teamed up for a plan most diabolical.

The camp value is in full effect. It doesn’t take long for the camera to tilt, the swinging music to start, and the fights to erupt in comic-book action sound effects that splat on the screen. But there’s a remarkable point to his farce in how it takes aim on how West’s more duty-bound version of Batman is more essential. Infected with a strange potion from Catwoman, the caped crusader finds himself doing things he wouldn’t normally do. He fires his trusty butler Alfred, ditches Robin for a ride, and has a surprising amount of bloodlust for his enemies. The true 1960s Batman wouldn’t smack about The Joker asking if he wanted to get nuts; that’s Michael Keaton’s line from the 1989 Batman!

It’s this focus on Batman’s almost innocent vigilance being stripped away that his more laughable personality becomes all the more welcome. Once we’re settled in with a plot about the villains stealing a duplication ray, it’s almost terrifying how the more cheerful Batman’s charm takes a dark turn. It’s surreal and almost frightening to hear Adam West’s depiction of Batman stating his next item on the agenda is to kill Robin.

That being said, there’s still plenty of goofy theatrics to please any Batman that appreciates some great tongue-in-cheek humor. Cameras will tilt for action scenes, comic book style sound effect graphics will pop up with the punches, and, of course, there will be some groovy Bat-dancing. But it’s all done with an affection for the material that never goes for the easy jokes. It reminded me very much of the animated series Batman: The Brave and the Bold, a show with no fear for embracing the campier aspects of silver age Batman, where the villains weren’t exactly prolific figures of pathos.

Return of the Caped Crusader has an uncanny aroma of a movie the Adam West-era Batman deserved. Can you imagine how wondrous it would have been to see a live-action depiction of Batman fighting his foes in zero gravity? Or how shocking it would be for the kids to hear Batman devilishly say “let’s kill Robin”? More importantly, it could have stood out for making a case that Batman’s cornball nature in do-gooding isn’t as dorky an inspiration for the alternative. Even more importantly, Batman has such sweet dancing moves the entire end credit sequence is reserved for him to bust a move.