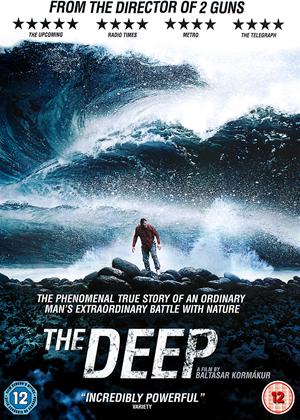 This is a fascinating film, based on true events and a real bloke (watch the credits all through at the end to see original footage of this individual from 1984).

It's basically about some drunken fishermen going to sea in a knackered old boat, which ends up sinking.

In artic temperatures, most men would die within minutes, yet one man swims 6 hours to land and becomes a minor celebrity as a result.

It's really a film about fame, I suppose, and how the spotlight of fame can land on someone totally unsuited to it and for random reasons.

Only the 2nd Icelandic film I have seen (the other being Of Horse and Men which also involved a lot of drunkenness - maybe it's an Iceland thing? Well, it is cold there...)

The Deep is an unassuming little film, but I enjoyed it greatly. 4 stars.

An ungushing presentation. - The Deep review by BE

A nicely crafted presentation of a man caught in a real life catastrophe at sea, saved by his body fat. There's a plus to everything! Olafur Olafsson deserved his wages for going thru what must have been a very gruelling time making this movie. I was quite taken with his acting skills when I saw him in the recent Icelandic television series 'Trapped'. A very natural actor. He didn't disappoint.