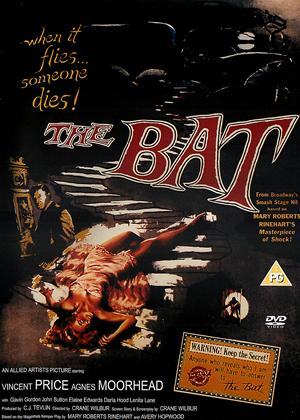 Bats in the belfry - The Bat review by Count Otto Black

This creaky old thriller advertises itself as being a Vincent Price movie, but actually it was made just before he got promoted from dependably sinister character actor to A-list leading man, so he doesn't get all that much screen-time, which is a pity, because he's by far the best thing about this tepid Old Dark House murder mystery.

The Bat, a masked serial killer who, despite his name, does not in any way dress like a bat (presumably to avoid lawsuits from DC), but does at one point release a bat into somebody's bedroom for no discernible reason, has a backstory which, if we actually saw it, would make the film about twice as long, but to save time and money, he's just mentioned a couple of times before popping up in the flesh because the script says so. Who, out of a cast so small that several characters are talked about but never actually appear on screen, can he possibly be? Is he Vincent Price, who is clearly established at a very early stage to have multiple connections with bats and therefore absolutely must be The Bat?

Well, if you've ever seen a film like this before, you'll know he's not the clumsily labeled obvious suspect, so it's not a spoiler to say that Vincent Price is not The Bat, despite practically having a neon sign over his head reading "I AM THE BAT". And there are so few other suspects that you won't have much trouble guessing very early on who the fiendish criminal mastermind really is, if you care. Which you won't, because the cardboard characters in this extremely dated movie give you very little reason to care about them. It's not far off being an overlong Skooby Doo episode, apart from the fact that a few people die, completely bloodlessly of course, despite supposedly having had their throats ripped out. Compared with the kind of films being made by Hammer and various European studios at the time, this tired effort must have seemed old-fashioned by the time they'd finished shooting it. If I didn't know it was made in 1959, I'd have guessed it was at least a decade older.

What really sinks it is the script, which makes no sense whatsoever, but not in a hilarious Ed Wood kind of way. If Vincent Price isn't The Bat, why does he coincidentally happen to have a satanic bat idol hidden behind a curtain in his office? Who knows, and who cares? It's a very minor film indeed that only sputters into life when Vincent's on screen being as good as he nearly always was. Otherwise, it's formulaic, illogical, and rather boring.