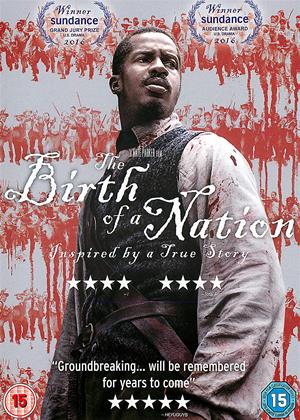 Rent other films like The Birth of a Nation

Reviews of The Birth of a Nation

The Birth of a Nation review by Mark McPherson - Cinema Paradiso

The most memorable shot of Nate Parker’s The Birth of a Nation would be when a white child frolics out of a house, carrying a black slave child behind her on a noose. It’s a moment of shock and disgust, nailing home the inhumanity of the racist slave era. But this shock only comes in small bursts for a picture that seems to be attempting a balancing act between a raw racist portrait, Oscar-bait drama and a simple crowd-pleaser.

The story chronicles the life of Nat Turner (Parker), a slave that learned to read, study the word of God and eventually lead a massacre against slave owners. Chosen by both his own people and his slave owners to be a more educated slave, Nat is touted as the preacher for slaves that boosts morale. His skill of words not only attracts him a wife, but interests neighboring slave owners more aggressive with punishment. The other owners recruit Nat as the local preacher in hopes that he’ll get them back to work. But with each trip to each slave camp, Nat witness the atrocities grow worse. Perhaps the most disturbing sight he witnesses would easily be watching a slave on a hunger strike having his teeth chipped out of his mouth and being force-fed by his owners.

This is a very grim subject and deserves to be treated for as dark as it is portrayed. The issue with Parker’s interpretation is that it doesn’t hold this level of disgust. As if to even the picture out, there are several moments of cliched levity. Turner watches the love of his life first enter his church and curses in astonishment, quickly covering his words with a prayer. His marriage and fathering of a child is quickly showcased in the form of a montage that lacks any greater depth. The moment when Nat decides to rise up against the masters and recruit other slave to join his army carries the same trumped up dressing as The Patriot. The music swells as he asks for those to sacrifice their lives and step forward in an overused cliche that even Mad Magazine was making fun of decades ago.

The picture kept winning me over and losing me during Turner’s massacre. Some of the violence is presented with the brutality and and grotesque nature of revenge. But then there are moments when the violence is portrayed more as a campy slasher. A slave cutting off his owner’s head in the dark night is brutal in depiction, but loses some of that edge when he has to hold up the severed head for no purpose than to show he severed a head. That’s the type of display I howl at in horror picture. Should I really be reacting as such towards a movie about a graphic and horrific time in history?

The Birth of a Nation shares the same title as D.W. Griffith’s racist classic of epic filmmaking, an intentional move by Parker to reclaim the title and bring a larger focus to race. Griffith’s original film was certainly despicable, so horrendous in depiction blacks that his follow-up feature was an apology picture. But Parker’s film doesn’t contain the same level of grand filmmaking or even the shock it aims to extract from the audience. If Parker really wanted to send shockwaves through American culture on race, he should have gone further to make a challenging movie rather than one that will cheap out to get audiences clapping and hooping for Nat Turner driving a knife into his master’s throat. I want to feel for Turner’s plight and the conviction of his divine reasoning; not be told to by the soundtrack.