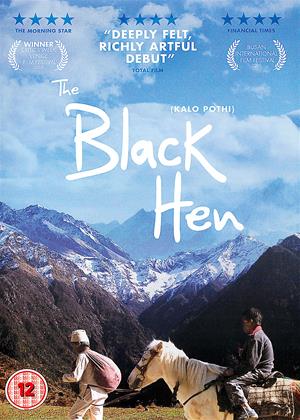 Synopsis:
In the remote Nepalese village during the Maoist Civil war, Prakash and Kiran, two 12-year-old boys are best friends, despite belonging to different casts. The simple ownership of a hen means a world to them: by selling the eggs they can make money and fulfil their childish dreams. But their society is constrained by poverty and caste divides. The sister of the poor one, Prakash, secretly joins the Maoist party, while the groom of Kiran's sister gets arrested and killed by the Maoists. Trying to get the hen at any price Prakash and Kiran have to face the harsh reality of the world surrounding them.
Actors:
Khadka Raj Nepali, Sukra Raj Rokaya, Jit Bahadur Malla, Hansha Khadka, Benisha Hamal
Directors:
Min Bahadur Bham
Producers:
Min Bahadur Bham, Catherine Dussart, Anna Kachko, Devaki Rai, Tsering Rhitar Sherpa, Anup Thapa
Writers:
Min Bahadur Bham, Abinash Bikram Shah
Aka:
Kalo Pothi
Studio:
Matchbox Films
Genres:
Drama
Countries:
Nepal

Reviews (2) of The Black Hen

Suffer the Little Children - The Black Hen review by TE

A fascinating insight into village life in a nation (Nepal) where forces of superstitious tradition and modern life are on a collision course.

There is humour in some of the ways in which the resourceful children seek to get by in life, but mostly it is a hard-scrabble world governed by violence and the weight of the caste system.

This is a powerful film that deserves a wide audience.

Well this is probably the first Nepali film i have watched and may well be the last.

It's so-so, very slow-moving and sometimes confusing. Some cliched sequences too.

But it ticks the world cinema boxes. Stunning mountain scenery.

I do not know much about Nepal BUT I did know about Maoist rebels (remember Chairman Mao killed over 30 million people) and the caste system (which the British in India tried to end but couldn't). The caste discrimination is endemic throughout India of course, yet accepted.

The Black Hen is a Nepalese film about sacrifice, loss and learning to release a hold of past pain, directed by Min Bahadur Bham – and is leaps and bounds above anything they’ve previously done (in regard to Nepalese cinema). What stands apart are the meticulous shots that contrast war against freedom and peace, and desperation against hope. They’re so beautifully done that can even stand on their own, without the narrative structure adjacent to them. To summarize: The Black Hen is poetic, aesthetically pleasing, mind-bogglingly honest and a potential contender for numerous awards to come.

The Black Hen follows a, surprise: black hen, whose whereabouts are looked after by several somebodies in the dire need to sell the poor animal to a neighboring village. Also, a decree by the village chief was being made which read that each and every hen should and must be sold to the decree proclaimer. Much to the dissatisfaction of the black hen’s master, he avoids selling the hen, but his father later succumbs to pressure and gets rid of the hen before you manage to spell the word H E N.

Thus, the boy we follow embarks on a quest to retrieve it and stumbles upon many obstacles which inevitably lead to a warn-torn area, still repairing morals which predate back to the Maoist rule of the country of Nepal.

In a film revolving around a domesticated chicken – there is much nuance to be extrapolated about wars, the nature of peace and reconciliation between opposing ideologies. The Black Hen does a very good job of translating emotions through the children’s doings on screen, and for this: it gets one Adrijan interchangeable point.

In continuation, in The Black Hen, implicitly and otherwise, plethora of symbolic allusions are scattered all throughout and this is where the film’s mystic nature really resurfaces to bring narrative order as its final wish. And just like our two boys Prakash and Kiran, played respectively by Khadka Raj Nepali and Sukra Raj Rokaya – we too are mesmerized to learn what the world brings them about, in all its twisted morality and borderline questionable stroke of events.

The Black Hen is by no means a typical entertaining movie to which you can shove popcorn down your throat and expect a big explosion to pull you out of your seat and tremor the surrounding areas to a halt. Rather, its contemplative, documentary-like nature tends to cocoon the viewer about in a Nepalese shell of equal times joy and bittersweet doings. In a way, it’s as if director Min Bahadur Bham decided to transport the Nepalese reality onto the screen while losing nothing from the conflict Kalo Pothi portrays.

A must see for cinema lovers and those who appreciate quality film-making above all else.