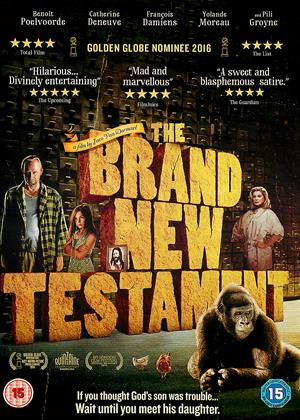 Reviews (5) of The Brand New Testament

The first thing to say about this film is that it is Belgian. And Belgium is famous for its surrealism (eg Matisse) and its bureaucracy (The European Union is based there. Nuff said).

But it is MORE than just Belgian - it is from Wallonia, the southern half of Belgium, with a third of the population, formerly heavily industrialised area, and vehemently anti-Flemish (the very Catholic Belgian northerners who speak Flemish, a dialect of Dutch). Walloons are well-known for being a bit, how you say, 'individual' and 'quirky'. Well, that shows in this film.

Basic plot as on the DVD blurb - God is real and lives as a bureaucrat in Brussels, European HQ of cold faceless bureaucracy. However, he is not the main character - his daughter Ea is. And it's a change to see a movie narrated by a small girl really - and watch her adventures (though I do not agree a world ruled by women would be full of love and peace LOL!)

It all gets very silly, especially the 3rd act, but there are some genuine laugh-out-loud moments before then - and it's all warm-hearted in the style of AMELIE (but more imaginative and less schmaltzy).

Like watching Dali on one of his more adventurous days. Some parts of the film made me cry with laughter.

Quirky but tedious - The Brand New Testament review by Alphaville

Nice idea soon runs out of steam. God is a cantankerous old man living in Brussels who hates mankind so much that he makes the toast fall jam side down. His 10yo daughter rebels and texts everyone to tell them the date they when they will die. There are some humorous moments here, but there are still 1½hrs to fill. So the daughter collects six disciples and each relates his/her boring ‘gospel’ with much use of voice-over and stagey talking to camera. Some reviewers seem to find this hilarious, but for most viewers patience will be in short supply.

Committed theists may find material here to titillate or offend them but it’s a pretty bland satire boringly filmed. Worst of all is the awful Benoit Poelvoorde, a Carry On character who shouts his way through the film as God searching for his daughter. And the Carry On score doesn’t help. Deicide was never more justified. A film for those who think that quirkiness compensates for depth of character, sustained

Quirky, like Amelie on steriods - The Brand New Testament review by RW

Totally bonkers film that tells of God's daughter wanting to annoy her dad, to escape from her home and come to earth.

Didn't go where I expected it at all and was full of wonderfully quirky characters and a crazy plot. Some good laugh out loud moments, some emotional moments and something that made me smile almost all the way through.

Loved it and will definitely buy it.

hugely good, watched it twice in 24 hours - The Brand New Testament review by pete b

very accomplished and obliquely amusing film. nothing bad to say about it. very enjoyable, and my 13 year old granddaughter enjoyed it too.