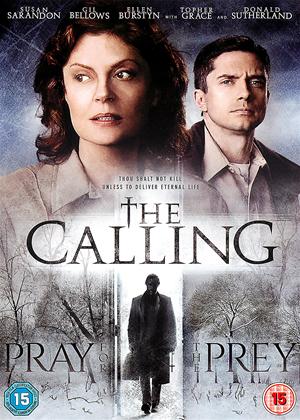 Reviews (1) of The Calling

I loved this film. It gripped from start to finish and no disappointing ending.

Susan saradon as always, to me anyway, brilliant. well worth renting.

The police procedural has become an all too common format for modern mysteries and crime drama. The Calling is yet another notch on that wall. It’s a quiet piece of police drama that unsuccessfully attempts to merge elements of Fargo with its winter setting and Seven with its religious-based villain. But instead of mixing well enough to create an entertaining thriller, the movie sort of sits there with its standard mystery staring off blankly into nothing.

The small Ontario town of Fort Dundas is rocked by a series of grizzly murders. The victims are picked off in various ways, but left behind with their mouths placed in an open position. In order to be made in that shape, the killer would have to hold the mouth open for at least an hour. This killer is known as Simon and he certainly has a lot of time on his hands as he also runs around playing the magic healer of less-terminal illnesses. Tasked with solving the case is Inspector Hazel (Susan Sarandon), a reserved detective who has grown accustomed to her coffee and diner routine. When the murders start growing and spreading across Canada, she’ll need to rely on her partner Ray (Gill Bellows) and young rookie Ben (Topher Grace). Thus begins the cat and mouse game where both participants are using walkers to creep along. Donald Sutherland also shows up to deliver more exposition in order to keep things interesting by making you wonder just what Donald Sutherland is doing in this movie.

The procedural shifts through all the expected plot beats in a manner and behavior similar to Hazel herself. It establishes the victims, gives some brief insight into the killer, reveals all the clues on cue and leads up to the inevitable one-on-one meeting of Hazel and her suspect. The plot does not want to create small talk by developing any charismatic characters or staging any brilliant photography. All the procedural does is saunter in quietly, fulfills its usual order and then creeps out just as silently. If you fall for its downbeat tone, you might admire it from afar. But any potential the film had is never paid off.

Mind you, this is no fault of the actors. Susan Sarandon does her best to keep this picture together as a casual cop struggling to put the pieces together. Topher Grace is also well-suited as a detective who means well, but ultimately comes off as a dorky kid (sorry, Topher, but you have yet to shake that image). The issue is the tedium of what these actors are given to work with. There are very few moments when any of the characters get to break out of exposition mode. It may seem as though the script is just trying to keep things moving along by trimming some of the fat, but a lot of the entertainment was shave off in that excess. This isn’t exactly a new brand of killer they’re tracking nor is it an entirely original concept. I can see most of the writing on the wall and ended up just sitting in my seat watching another procedural go through the motions. Where is the personality? Where is the tension? Where is the surprise? Where is the excuse to keep me invested in this mystery? Where is my coffee?

The Calling needs a massive dose of adrenaline to wake it up out of its by-the-book coma storytelling. Where is the momentum to find this killer? Where is the shock value of the killer’s actions and the deeper depths of inner thoughts? Are there any original ideas present we haven’t seen in a dozen other religious murder mysteries? Does the film even care about these characters? These are the questions that go unanswered in this snoozer of a thriller. I can already feel it slipping away from my memory the same it way made me nearly slip out of consciousness.