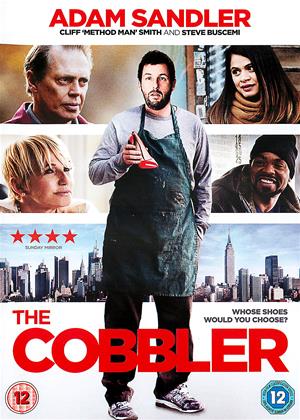 Reviews of The Cobbler

Films like The Cobbler are a trap. Its terrible nature seems almost a given by Adam Sandler’s inclusion as the lead, but it doesn’t have the familiar tone and odor of a Sandler comedy. The story appears rather simple and clever with a plucky little shoe repairer trying to find a better life. It’s engaging enough that you start to get into it, but that’s when the teeth of this time-eating beast snap shut around the viewer. And when it bites down, it chomps so hard that you’ll be kicking yourself for days after being so gullible.

The whole plot starts off as an innocent enough concept. Max Simkin (Adam Sandler) is a lonely New York cobbler who spends his days buried in his work. His customers look down on him as the weird, shy guy that fixes their shoes. But when his modern machinery breaks down on a busy day, Max ventures down to the basement to utilize his missing father’s old shoe stitching device. When he successfully fixes a pair on the aged machine and tries them on, he takes on the form of the owner. It doesn’t matter the race, gender or age of the customer. He can be all of them thanks to some strange stitching magic that is never really explained.

From this point, the movie can go one of two ways as its tone has been fairly timid up until this discovery. It could proceed as a sweet little indie comedy about a man trying to better himself and his community through small acts of learning to walk in another’s shoes (literally). Or it could just turn on easy mode with a series of lazy gags concurrent with Sandler’s resume for comedy. It's actually surprising that the film goes with the latter. One might think there would be some dignity given director Thomas McCarthy’s resume of directing The Station Agent, The Visitor and Win Win. I’m sure Sandler thought so as well when he signed on for the project, but the film just retreats far too quickly into Sandler’s safe zone of humor.

What does Max do with such powers over identity? He abuses it by being able to step into the role of a worry-free child who can get into trouble and an upper class resident who takes sexy showers with his hot wife. There is no concern about the danger he will cause others as it's established early on that he’s more interested in selling his store than strengthening his dying community block. But after his robbery attempt results in a political entanglement to destroy the neighborhood, Max comes around and uses his magical shoe powers to help his community save the rec center. Sorry, I meant the lower class block of homes and businesses. Though I suppose there might be a rec center on that block.

While all this was pretty simple and uninteresting writing, I wasn’t as offended by the picture as Sandler’s previous films which try so hard to generate laughs. The first fourth of the film is actually pretty competent and sweet before it starts coming apart with cliches. At the very least, I was grateful that Sandler didn’t have to interact with CGI animals or scream and shout with a vast array of ear-splitting “voices”. But then the finale reveals itself as the most baffling of a twist ending I’ve ever seen. It comes so far out of left field that it feels like another movie’s ending was spliced into this one. Nothing at any point in this entire film would lead you to believe anything that happens in the last five minutes of this film. Let’s just say it involves a cameo by Dustin Hoffman, an expensive car and an underground base.

I’m now convinced that Adam Sandler’s mediocrity is contagious. It’s the only explanation I can fathom for Sandler taking on a project with accomplished writer/director Thomas McCarthy and still managing to make a dud of a comedy. It lacks any acting talent from Sandler who seems to believe not showing any acting is subtle. The film's moral core is absent in how Sandler's character is forced through the motions of this artificially sentimental story. And I still can’t get over that ending and how McCarthy could be pleased with such a big middle finger to the audience. You know you’ve been pranked when the film earnestly states the line “You are the guardian of soles. You are the cobbler.”