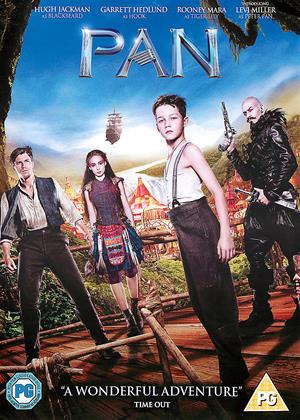 Does not pan out. - Pan review by NC

Not quite sure where the peter Pan thing is in all this, but does not compute. Jackman does a good job of his part, and the barbarian princess is very ornamental, but think will keep with Dustin Hoffman in Hook...........

Pan is a spectacle, a digital carnival for kids, with minimal story, over-the-top dialog, zero logic, questionable CGI and surprisingly decent use of 3D by far. Its unapologetic, convention-defying, ambitiously fierce standpoint packs a fun’s worth of 3 movies grand total, and attacks the senses in ways not always thoroughly pleasant for the body to comprehend.

Right off the bat: Pan is not Oscar-worthy material. And it’s not meant to be. It is a silly prequel/story of how author J.M. Barrie’s most famous creation -- Peter Pan – got to be the way one knows it – an origin story of grand proportions. It has plot holes similar to those of a Swiss cheese, but clearly that’s not where the planned budget went. Instead it’s more focused on providing a spectacle for the masses, with the filmmakers lead by director Joe Wright, trying to tell a spectacularly picturesque, visually stuffed escapade by merging known legends, fantastical creatures, dizzy camera angles and then some. Imagine a medieval carnival, convert it to digital, multiply it by infinity, add random CGI and toss some fake-looking wigs: there you have it – you’ve just accidentally made Pan.

Pan has some decent film moments, clearly inspired by Charles Dickens’ Oliver Twist; in truth the whole orphanage premise is directly lifted from the aforementioned novel – and this is where the movie really shines. It’s meant to be a parable of a children’s imagination during times of war, with crazy stunts, clever use of space, great introduction and young actor Levi Miller stealing the whole show. Once things get going however, one’s suspension of disbelief gets suspended and for recommended continuation it’s expected one turns off all grey area matter in the brain. After all, carnivals are affairs of magic, trickery and upside-down inside-out festivities, and Pan has plenty (if not all) of those all around.

The flaws yield for an essay on ‘how not to shoot and edit scenes’, but even those are at least entertaining to watch. The key remarks here would be Pan’s inconsistency of scenes, colorful mishaps, frantic cuts – it almost plays as a dumbed down, PG13 version of Indiana Jones and the Temple of Doom (1984).

Overall, Pan is a guilty pleasure for both kids and adults to enjoy. It’s the perfect family movie (with enormous budget), an adventurous tale for a small kid in search for his true self.