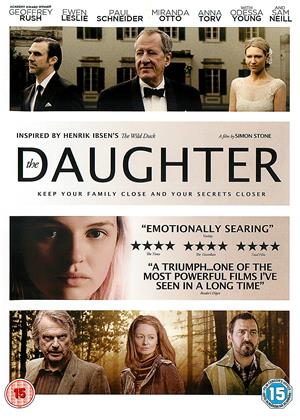 Reviews (3) of The Daughter

Dire - The Daughter review by PR

No redeeming features in storyline. Expected more of Geoffrey Rush but he was barely in it.

Sound very poor could not make out what actors were saying and there was no subtitles option on disc.

I was disappointed in this film. It did vaguely follow the theme of Ibsen's Wild Duck, but I did not feel it added something more to reflect on.

Slow burner. - The Daughter review by BY

This film is indeed a slow burner that ends explosively.

You may be tempted to give up watching in the first 20 to 30 minutes but your perseverance will be rewarded as the story unfolds.

A climactic ending to say the least.

Only complaint was poor sound and a lot of whispering and mumbling from the actors. Sam Neil is his usual class act.

The Daughter is a surprise when it comes to Australian cinema, a particularly pleasant one at that, showing how true art-house cinema should really be. It’s based on a certain Norwegian play called ‘The Wild Duck’, with this one being the latest adaptation for the big screen, and most probably the best one till date. To summarize: The Daughter packs levels after levels of deeply intertwined narration that puts most self-dubbed modern “dramas” to shame by a mile, and combined with stellar acting – is a serious contender for numerous awards to come.

The plot starts off like this: typical middle-class family loses their primary source of income via means that put the padlock over a wood mill in their small town. Meanwhile, their daughter has her own problems and starts worrying for not losing her boyfriend in the event if all move out of town in search of new job opportunities. However, as we further go into the story, the narrative branches off and takes the focal point of several closest-surrounding family members who spice things up even more than what was initially thought.

Soon, we learn about another family in the same town who welcomes their son: and this is where the plot entangles the audience with minimal details revealed to keep the suspense naturally flowing. From here thereafter, the thrill keeps on going until the very climax, when (not spoiling anything) one of the main characters takes a turn for the extraordinary, the extraordinary good sort to speak.

To this extent, The Daughter plays more like a thriller than your ordinary, regular character drama.

Still, the flick’s stronger points are rewarded trough the characters mutual interactions: how they move and what they say, instead of, you know – plain exposition so many features are guilty of doing when they run out of original ideas. Not The Daughter though, because everything is meticulously planned to an extent where you get to firsthand experience the thrill of everything building up thus far. And when it goes off, it hits you strong, and there where it hurts the most.

The Daughter features some of the finest acting from an Aussie movie I’ve ever seen (and I’ve seen a lot). Sam Neill and Geoffrey Rush are extraordinarily good as always, but the real star here is Odessa Young who delivers nothing short of true realism in its purest form.

One thing to notice in regards to themes is the one of sexual desires, lust and the loss of innocence. The Daughter gives priority to most whist staying true to the source material (although, the play upon which is based also poses similar tropes, albeit in a ‘politically correct way’).

All things considered, The Daughter may very well be the best Australian film of 2016.