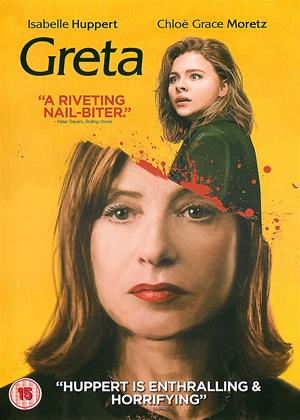 Isabelle Huppert, Chloe Grace Moretz, Neil Jordan. So much talent. Even Zawe Ashton has a small role. So why is this film so rubbish?

I have two theories.

The first theory is that everyone thinks they're doing a different movie. Isabelle Huppert is making a campy psychological horror film, in a Fatal Attraction vein. She's obsessive, stalking Chloe Grace Moretz, thinking this poor lonely young woman, new in town, who expressed an interest in friendship with Huppert's older metropolitan woman experienced in New York City ways actually needs an ersatz mother in her life. Huppert's Greta will go to any lengths to do this and win over Moretz. Greta loves the piano and designer handbags. She wears massive sunglasses!

However, Neil Jordan and Chloe Grace Moretz are making a completely different picture... a French arthouse movie but in English. It's about desire, loss, longing. Everything is Very Serious. Stephen Rea shows up in the last thirty minutes Acting (they're all making a film with an excess of capital letters).

My second theory involves Neil Jordan not having made a decent film in years, with everyone else willing him on to turn a corner, but his lack of engagement and understanding of the material making that impossible.

So, this isn't Neil Jordan turning a corner, not even close. The result not only doesn't work, it makes you wonder why you're still watching it. But you do, because surely the talent here will make it work, right? But does it? No. Why does Neil Jordan's film keep putting Chloe Grace Moretz into a box? Don't really care.

I'm Like Chewing Gum.... I Stick Around - Greta review by BG

If a lost handbag is found on a subway train, to return it to its rightful owner is the Good Samaritan thing to do, but in GRETA it is the worst case scenario. Soon New York waitress Frances finds that she is the obsession of a disturbed older woman, and her life slowly becomes a nightmare. This has a familiar ring to it, but if you like films such as PLAY MISTY FOR ME, FATAL ATTRACTION and MISERY, you might enjoy GRETA. Not that I'm saying it is as good or better. Neil Jordan certainly builds up the tension, but there is a misstep or two with some obvious plotting, i.e: what will happen to a private eye, and who Greta's final visitor really is. However, a double dream-vs-reality is effective, and I liked the two main performances. Isabelle Huppert is suitably creepy in the title role, who gradually becomes more obsessive, and her highlight scene is dancing to Chopin after committing murder. Chloe Grace Moretz goes from a sad Boston girl mourning her dead mother, to a trusting person who needs a friend, to a terrified creature fighting for her life. There is also a scene that demonstrates that mobile phones with good photo reproduction can be quite scary...

Very good watch this movie it will hold you untill the end but understanding this woman is another matter !!!! Wow

I had no idea really what to expect. Not my usual choice of film but it was both entertaining and absorbing. Good for a rainy afternoon.

It’d be easy to condemn Greta as a mystery that unintentionally displays a paranoia of sympathy, that any kindness we show from the pathos we experience is a disadvantage to be exploited by the evil. But it’s the assembly of this dark psychological thriller that kinda keeps that lingering problem at bay. It’s a thriller just competent enough to appreciate the picture on its own merits rather than be seen more overtly as a troubling commentary on societal trust.

Frances McCullen (Chloë Grace Moretz) is seen as the well-meaning victim of this story. She’s a waitress who just endured the tragic death of her mother and hasn’t gotten over it after over a month. Yet she doesn’t appear to have lost all hope as she discovers a missing purse on the subway belonging to Greta Hideg (Isabelle Huppert) and decides to return it to her. She visits the old woman in her apartment and they share a cup of tea. In any other picture, a unique bonding experience would form, where the concerns of Frances’s friend Erica (Maika Monroe) would be irrational for a young woman forming a bond with an older woman.

However, this is a thriller and there must be some sinister intent from a mysterious figure and Erica will be proven right in her suspicions (she must be conscious of the movie she occupies). Thus, Greta becomes the creepy woman who intentionally placed her purse on the subway and keeps tabs on who brings her back her contents. Frances will cut off their relationship but the terror won’t end there as Greta proceeds to stalk the kind woman who misplaced her trust. As we soon learn, Greta has a troubling history involving drugs and, of course, a movie such as this would resort to such demonizing of the elderly with this kinda backstory.

As I stated, the real appeal here is more from the atmosphere than anything else. Greta goes through the entrapment gauntlet of kidnapping Frances, knocking her out, locking her in her apartment, and forcing her to doing all sorts of activities from playing the piano to cooking for her amusement. Frances will also go through the gnashing of a victim trying to escape, at one point slicing off one of Greta’s fingers which no doubt generated wincing and cheering from the hyped up audience.

Much of the frights, however, rely on being able to accept that Greta has the time and energy to pull off these elaborate schemes to kidnap, enslave, and even kill others that enter her domain. She’ll stab people with syringes and fire guns on them with ease. It’s almost like trying to watch a justification for how the aged Jigsaw of the Saw movies could pull off such genius traps. This building of tension through such a sinister elder makes me wish the film went the extra mile of absurdity and find a backstory of how Greta discovered a super drug that allows old people to live longer but makes them kill as well.

Greta never gets that goofy though and remains in a sorta ho-hum thriller scenario that fluctuates between middle-of-the-road surprises and decent set pieces of terror. It’s a cunning enough film that those more accepting of the genre will no doubt enjoy its mounting of discoveries, tortures, and twists, absurd as they can be at times. But once you venture out of thriller mode, the film merely comes off with the same problems as any thriller, from the contrived character motivations to the very societal commentary it perhaps unintentionally weaves.