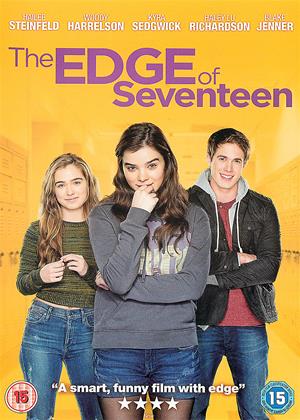 Reviews (1) of The Edge of Seventeen

A really good watch - The Edge of Seventeen review by BE

A delightful 'coming of age' movie which steers away from the usual over zealous and over acted Hollywood portrayal of teenage angst. Excellent performance from Hailee Steinfeld plus a strong cast. Very watchable and just managed to avoid a twee ending. The lack of too many 'Heys' and 'Okays' in the American dialogue is to be applauded!

The Edge of Seventeen review by Adrijan Arsovski - Cinema Paradiso

Kelly Fremon Craig both has directed and written The Edge of Seventeen – a coming-of-age flick about a teenage girl seemingly lost in life, who has to overcome first-world challenges in order to be accepted by who she really is? Sounds familiar? It is and it’s not at the same time. Where The Edge of Seventeen differs when put against other movies of the similar caliber is director Kelly’s approach to produce black-comedy-worthy-material where none can be found. The Edge of Seventeen (a homophone for The AGE of Seventeen) is a film not to be missed, period.

Nadine (played by Hailee Steinfeld) is a teenage girl who checks low at the self-confidence scale, and it also seems her luck already ran out from in life. Despite suffering from anxiety and depression caused by such matters – Nadine doesn’t give up. She goes through the motion and knowingly pulls her identity out of the comfort zone – just so she can, against all odds, fit in. Soon however, Nadine’s issues drag her newly-acquired motion to unseen territory where she seems completely lost. She even writes a suicide note that is later debunked by the always-odd, but impeccably charming teacher Mr. Bruner (played by Woody Harrelson) who is seemingly having a bad time on his own, and is tired from oddballs like Nadine.

The banter that later ensues between the duo is comedic genius, and sadly it’s over before you know it. This happens on few instances and is always a treat to watch out for.

The Edge of Seventeen includes a subtle soundtrack that gives the actors room to showcase their full acting range with all its capabilities. It doesn’t dominate the overall sound, but sure as heck it makes for fitting score to accompany Nadine’s antics that are alien to most of her classmates, family and even the closest of friends.

As the story unfolds, we gradually become aware of the main conflict, which is namely triggered after Nadine’s best friend Krista (Haley Lu Richardson) starts dating her older brother Darian (played by Blake Jenner). This ‘unholy matrimony’ put Nadine on the edge as she never felt so betrayed by a person before in her life so far. She even threw an ultimatum toward Krista which consisted of choosing between either continuing dating Darian, or choosing to stay besties with her. Needless to say, Krista didn’t respond as Nadine hoped she would. So, in a way, Nadine’s struggles are between herself and her other self.

Which one will prevail?

Although predictable at times (what isn’t up to this point in time?), The Edge of Seventeen is still a rather fresh take at coming-of-age stories that makes you sympathize and care for the main character, and that is enough to give it a chance, if anything.