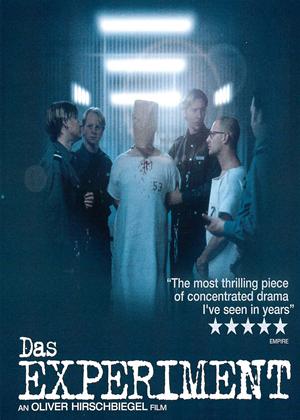 Reviews (4) of The Experiment

A superb and shocking piece of cinema about a psychological experiment which goes catastophically wrong. A number of men are selected for the experiment which involves some being prisoners and some guards. As the power goes to the heads of the guards, things get out of control as they try to demean their charges by imposing cruel punishments and changing the rules. An edge of the seat drama in which it seems there can be only one tragic outcome.

Oliver Hirschbeigel is a hugely promising director, with several hard hitting films already to his credit. This is another. This low budget German film makes up for what it lacks in budget with intense performances and claustrophobic sets. The whole experiment rages out of control with extreme consequences for those involved. Very memorable and a good reason not to volunteer for such projects!

Good but a bit too much - The Experiment review by JD

I remember this psychological experiment and was part of the reason for requesting the DVD. The actual result is shocking enough without having to exaggerate so wildly. It is very gripping and all the actors are remarkably good (the Germans have a glut of good actors I wish they spoke English). Very good to the point that it was decided to invent a bit more. This time should have been spent on analysis of the realisation of the vulnerability of the human mind.

Yes, it's in German with subtitles, but don't let that put you off - it's rather good, although clearly a low budget effort.

The film is based on the book 'The Black Box Experiment' by Mario Giordano, itself based on the 1971 so-called Stanford prison experiment (look it up on Wikipedia). The film tells the story of 20 volunteers paid to take part in a psychological research experiment. Divided into 'prisoners' and 'guards', the 'guards' begin to take their role too seriously and the experiment moves from an innocent game, through ritual humiliation, to violence, retribution - and death.

OK, it's a drama - but perhaps a fictional illustration that power corrupts. And lest we forget, similar events happen in real life. The events at Abu Ghraib prison, anyone?

The two central characters are a taxi driver Tarek Fahd (who is given a somewhat weak back story and a girlfriend) and the 'guard' named Berus - they antagonise each other and clearly things are going to go too far. How far is quite scary - for a low budget film it is really well done.

There are a few loose ends, a few noticeable continuity errors, and the subtitles are in American rather than English and my German tells me that the translation is a bit uneven. But it's well worth watching. I also note that there has been a 2010 US remake with the Forest Whitaker, but I haven't seen that one.

The director is Olivier Hirschbiegel who went on to make the excellent 'Downfall' about the last days of Hitler, yet another excellent film.

I can recommend 'The Experiment' and rate it as 4/5 stars.