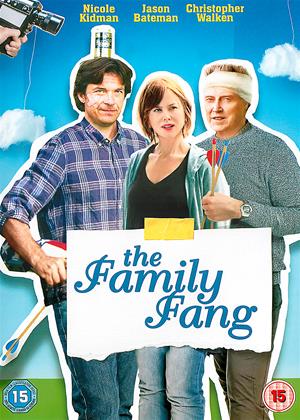 Reviews (1) of The Family Fang

This is film that enters some very well-worn movie territory. The parents that ruin your life. With a cast most producers would sell their grandparents for and a fine dramatic premise surely The Family Fang could not fail.

For me, it was a little from column A and little from column B. You have to hand it to Nicole Kidman her choice of starrers is eclectic and with Bateman taking on the directing reins and as well as a role he seems to be leading away from his more comic roles. He does a fine job. Walken and Hahn are old hands at this and probably hardly needed any directing.

So having said that, this should be a great film. But something was missing and I can’t explain what. Somewhere deep in the soul of the film that little spark that makes a standard film great was missing. It was impossible not feel sorry for Annie and Baxter but after what they had been put through, whether they agreed it was ‘art’ (they didn’t seem to) or not, you could not help feeling that they would not have anything to do with their parent whatsoever. Even America has a social services programme for children that are mistreated and whose parents make them commit illegal acts.

The story and performances kept me watching with the use of flashbacks in the form of a never used documentary ‘The Family Fang’ being a clever touch but I feel that you get out of the story what you bring to it.

For instance, I sort of get Caleb’s take on art, I truly do, but to take it as far as he does in the film leaves me cold. I could feel the pretentiousness washing over me as I watched. So, in the end, I couldn’t connect with them, I felt they was more of the touch of idiots about them and my tolerance for such people in real life would be lower than it was for this film. Therefore the treatment of the children just became abusive the more the story progressed.

The Family Fang is probably worth a watch but you really have to be in the right mood that’s for sure.

Jason Bateman stars and directs The Family Fang – a drama picture disguised as comedy that explores the relationship between demented, now senile parents and the amounts of “abuse” they subject their children under the guise of ART. Yet, there is nothing artistic in what they do and the way they do it: it’s just an excuse to execute their weird and bizarre fantasies over their unsuspecting kinship that would make Jigsaw from Saw proud.

Also, the film itself is weird as heck.

Christopher Walken plays Caleb Fang, a renowned ‘artist’ who, together with his wife Camille Fang (played by Maryanne Plunkett) go to great lengths to twist the ordinary art conventions into something straight out from a horror novel. They choose public places to do their bidding and use their children Baxter and Annie Fang (played by Jason Bateman and Nicole Kidman respectively) as art props whenever they get the opportunity to do so. In turn, while dealing with such circumstances, the kids grew up somewhat scarred, with trust issues that lead all the way back to the infamous parenting duo. They even made up a song that conspired killing their parents off, just so they could experience the true joy(s) of living life to the fullest.

The plot is told retrospectively (always a nice touch) a la Memento style, with Baxter and Annie searching for clues as to how and why their parents disappeared seemingly without a trace. However, after careful searching and tumbling around the house, they stumble upon what seems as a crime scene lifted right out the worst real life kidnapping scenarios. Thus, the siblings suspect that indeed, this may very well be possibly yet another stunt on their parents’ part – the penultimate art installation to break everything there is to know about following the rules.

The police however suspects the worst.

The Family Fang explores the themes of adulthood, parenting and broken individuals without assigning blame. That is – the viewer is instead put in charge of assigning blame between the two presented sides: the offspring and their parents. So, Bateman’s feature is kind of neutral in this regards, while also being bloated in others. Whether it succeeds or not, is a question for further debate.

But at least it tries.

Often times, The Family Fang comes off as quite depressing a feature: seeing two grown up individuals completely removed from any semblance of normality is a sight to be avoided at all cost. However, it also draws one’s attention toward the screen with the help of a constant barrage of dialogue that at least works a decent amount of screen time.

The Family Fang is a mixed bag that will most certainly make you think about your parents and how lucky you are they’re not the Fangs.