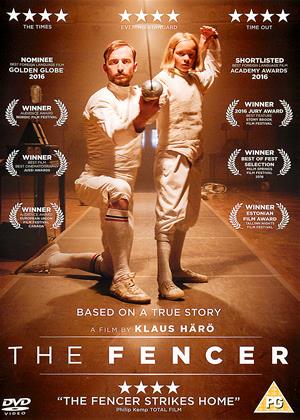 Reviews (6) of The Fencer

A Nice Surprise - The Fencer review by JP

'The Fencer,' based in a true story was a nice surprise as we knew little about it. There aren't too many films based in Estonia. The characters are very interesting and well acted, although the ending is a bit predictable. If you enjoy a heart-warming tale, then this one is for you. It shows us something about life post-WWII in Russian ruled Baltic states and how fencing brought joy into the lives of some school children.

Almost a ten out of ten! - The Fencer review by JR

Beautiful cinematograhy and very well acted. The children are presented unsentimentally, and the dramatic tension is strong although it is a quiet and thoughtful film dealing with the tragedy of the fall out from WWII. The love story is tender and believable. I loved it right up until the last climax of a David v Goliath fencing match when it became a bit cliched . But I could forgive that when the rest of the film was so good.

Worth Watching - The Fencer review by TE

There's plenty to enjoy in The Fencer, particularly the careful set-up in the first half of the film.

The atmosphere of the school is very well created, with its mixture of Stalinist repression and glimpses of possible changes just around the corner.

Much of the film's promise is lost, however, in a determinedly 'feel good' finale at the tournament in Leningrad. It all becomes a bit too sentimental and predictable.

A real treat - The Fencer review by BY

On the one hand you could say this was a predictable formulaic movie with baddies, goodies, a bit of romance, cute children and a feel good ending - but Sound of Music it ain't!

This was a really unusual film tackling a sad period in the history of Estonia when the Soviet occupiers hunted down those whom they thought had collaborated with the Nazis. Using fencing as a theme is I think unique: I certainly can't think on any other film where this has been done.

The production and cinematography were excellent and gave the film an authentic feel.

This is the first time I have ever seen a film focused on Estonia and it was a truly informative experiencing.

To sum this film up in a few words: enjoyable, entertaining, interesting, informative. What more could you ask for?

Having been conscripted into the German army during WW2, Estonian fencer Endel is now on the run from Stalin’s secret police in Leningrad. He hides away as a teacher in a small rural village, where he teaches the children to fence using wooden sticks. Then the school hears of a fencing competition in Leningrad…

This is a superbly realised and warm-hearted thriller-drama with fascinating teaching scenes, like School of Rock with swords instead of musical instruments. With a suspicious headmaster, there’s an undercurrent of tension throughout as we get involved in the lives of Endel and the children and the plot will hook you in as it builds to an irresistible climax.

A beautiful film - The Fencer review by BC

A beautifully film,I really enjoyed it.Perfect casting for the lead actors and a wonderful, sensitive performance from the actor who was the subject of this film., based on real events.