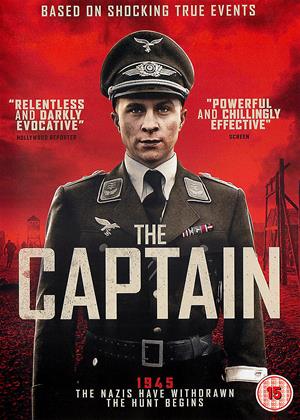 Reviews (6) of The Captain

Well worth watching - The Captain review by SB

Don't le the fact that you will need subtitles, from putting you off watching this film. It's good to see new World War II movies that are orginal. This is well acted and put tpgether for a low budget WWII film and shows yet more brutaility of war and just what people end up doing to survive and live and just how people can be changed into turning to the dark side of life, when they have lived and breathed under such terrible times. As the saying goes "We should never forget".

Based on what appears to be true events at the end of World War 2, and how easy it was for a 20 year old on the run from his unit, who then manages to get himself accepted as a senior NAZI officer with a reporting line direct to the Fuhrer!!

The film does highlight the growing lack of control in early 1945 and the atrocities that were allowed to take place without proper due diligence, and the power vacuum that was existing between the ARMY old school and the Gestapo / SS related forces.

If this period of history interests you then this is a film that should not be missed!

'Order' in chaos - The Captain review by PW

This film sat on the table for a while. I don't usually like brutal war films about Nazis. However what was so good about this film was a consideration of what happens when all order and control is lost. Germany which for the last 12 years has been under a cruel discipline is about to surrender. There is nobody to give orders, there is nobody in control. Then a plucky 20 year old almost without realising how, discovers that the craving for order gives him immense power as long as he looks confident. With nobody to tell these cowards what to do anything will do even this youth. The result is catastrophic. A great film.

Harrowing scenes but excellent film - The Captain review by SB

I wasn't aware of this story and was quite shocked at the brutality of those times when the Germans were killing their fellow men. It highlighted how easy it was and is for someone to take someone else's identity with harrowing consequences to others. This was a gripping film and definitely worth a watch.

Fascinating Film (in German) About the Chaos at the End of WWII, on the German Side - The Captain review by PV

OK so this is not quite up there with brilliant films featuring the chaotic end of WWII such as DOWNFALL or the wonderful German TV series GENERATION WAR. But it's a fascinating portrayal of the end of the war through the eyes of German soldiers - who eventually become a rag-taggle unit of lawless German soldiers, which reminded me a bit of KELLY'S HEROES or APOCALYSE NOW.

I wonder how much of the story shown is 100% true; and also yearn to know what happened to the first soldier the 'captain' meets called Freitag (Friday) which may be a Robinson Crusoe reference, as the 'captain' is stranded a alone on an island in a way.

The film shows how anyone can adopt utterly amoral brutality when they get a taste of power. It also shows how absurd it is to automatically respect someone for their name of rank or uniform, because it's all basically a pose. There used to be a TV series called FAKING IT when people got tasked with posing as various roles they knew nothing about AND they mostly pulled it off - I remember the laddish navy guy who posed as a drag queen, and NO expert guessed they were faking it.

We're all acting a role, and even if we don't think we're in a play, we are anyway...

The end credits of this are sort of fun, so watch them - Nazis driving through the modern-day town and searching passersby (obviously actors). This is the sort of movie Hollywood cannot make, and worth a watch. 4 stars.

Interesting but violent film based on a true story. I did not know that this had happened,  so from a historical point of view it is eye opening to see another aspect of what war can turn people into and the chaos that allows anarchy and brutality to be considered acceptable.

The film was well made, the acting was good and subtitles were easy to follow.