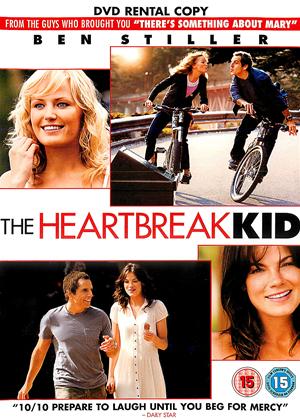 Reviews (2) of The Heartbreak Kid

A Big Disappointment - The Heartbreak Kid review by CP Customer

Funny, but not the Farrelly Brothers best. - The Heartbreak Kid review by CP Customer

Eddie is 40 and still single. After attending the wedding of an ex-girlfriend his father and best friend pressure him for being too picky and to just take the plunge. He soon meets Lila a beautiful free spirited environmental researcher, and after a six week affair Lila breaks the news that her job is forcing her to move to Holland, and no one else is available to take her palace as her employer only transfers single staff members and not those who are married. In order to keep her Eddie pops the question. However as soon as the couple leave for their honeymoon in Mexico he realises his new bride is a total nightmare, she’s immature, idiotic, an animal in bed, economical with the truth and utterly annoying. The problem is while in Mexico Eddie meets Miranda, an easygoing, charming sports coach who is in on vacation celebrating a family anniversary, and it’s soon apparent that he’s made a huge mistake as Miranda is the one he should have saved marriage for. Based on the 1972 film of the same name, this is essentially a romantic comedy with the addition of the Farrelly brothers typical slapstick and gross out humour. Ben Stiller is his usual self, Malin Akerman as Lila was great and the focus of the majority of the comedy but for me Danny McBride stole the film as the over controlling cousin Martin. It’s only the end of the film which for me was a bit of a letdown, and as a viewer made Eddie look a bit of a slimebag. Compared to a lot of other comedies around this is a well above average and pretty funny film, it’s nowhere near as funny as other Farrelly brothers films such as "There’s something about Mary", "Dumb and Dumber" and "Shallow Hal", but far better than "Stuck on you" and the god awful "The perfect catch".