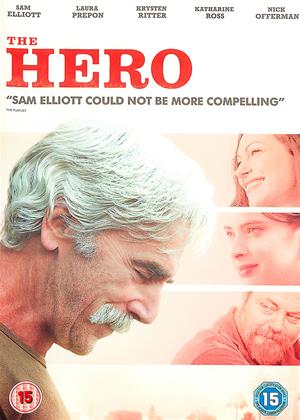 A simple, competent film that adequately passes an hour and a half, quite watchable, decent actors, but, is not really that interesting. If you are a Sam Elliott fan you will not be disappointed, others may be.

That Voice - The Hero review by JP

I somehow think this film will more appeal to an American rather than a British audience, I being one of the former. People of a certain age (like me) will remember Sam Elliott for his good looks and wonderful, deep voice. The hero is facing a lot of problems in his life when he meets and becomes attracted to a much younger woman. I don't want to reveal the problems as it would be too much of a spoiler. Let's just say they are troubles that many face as they age or are divorced.

It was nice to see Elliott and his real-life wife playing characters that are age-appropriate (in their 70's). Elliott is an actor who now is reduced to scrambling for roles in Hollywood movies or doing voice overs from BBQ sauce.

The film made me a bit homesick for California.

Sam Elliot is an actor iconic for his mustache and deep southern voice, sometimes with a cowboy hat. Even when doing a voice for The Good Dinosaur, he still ended up as a cowboy like figure. As The Hero opens, he is giving a voiceover for a BBQ sauce tomorrow. He says his lines and the audio director asks for another. Then another. And another. It quickly dons on Sam’s character and the audience that this is his career and life. Elliot’s role in The Hero doesn’t exactly let him escape from this persona but, much like the films Top Five and The Last Movie Star, proves there’s a human behind this career that’s more than just a cowboy.

Elliot plays Lee, a former icon of Western movies. It has been his life, so much so that he dreams of being trapped in his previous roles. At his lush estate, he tries to forget and push his work aside, getting high with his neighbor Jeremy and having casually blunt conversations.

Lee needs a change and has a few opportunities open to him in his old age. He may have a lead coming up in a sci-fi picture that could be a major shift in his usual typecasted roles. He finds a romance in the young comedian Charlotte (Laura Prepon), despite the massive difference in age that makes their relationship more than a little rocky. It may seem odd and even gross watching Lee rob the cradle, but it at least loosens him up enough to be a little more honest and blunt when accepting awards for merely being a famous man with a cowboy appeal.

Much like other films of this nature, Sam Elliot really opens up in this role to do more than stoically wax on western philosophy. He has a range that appeared to be missing from his simpler roles where he can really emote more than most audiences thought. He prepares himself for a role and gets so into the character that he breaks down in a pile of genuine tears. Later, he’ll sit on the deck of his house and stare contemplatively at the beach. These scenes don’t really shake his cage of acting to make the audience ask “who knew,” but this presentation at least allows Elliot to show off that he can do more than sell a truck.

It just comes off as disheartening that we never see Elliot break further through that wall that even the narrative seems aware of this. The drama of him reconnecting with his estranged daughter and coming to terms with his age on his most depressing of birthdays don’t exactly service a compelling arc. It’s more of an actor’s buffet where director Brett Haley has rolled out a massive spread for the aged actor to go to town on. And while it is unique to watch Elliot try a little of this and that, he seems to mostly be nibbling at a meatier story rather than sinking his teeth in deep.

The Hero has its moments of “look, look” to see a different side of Sam Elliot but nothing more. What’s most sad is that it seems Elliot’s notoriety is inescapable at his age that when he finally kicks the bucket, they’ll be a slew of memes about how he has to go to heaven to make some commercials or “the God abides.” It’s this realization that makes the movie an interesting exercise but also a painful realization of the limits of an actor.