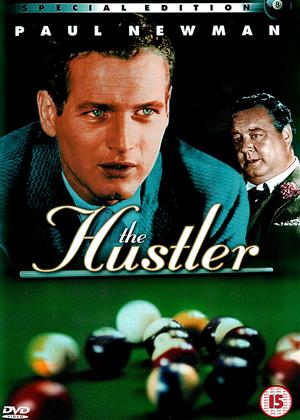 Reviews (2) of The Hustler

The Hustler captures an aura of nocturnal transience. Passing strangers cross paths in bus stations, hotels, waiting rooms and pool halls. It traps these nightflies in the frame of its b&w photography, in its noirish lighting, its urban set design and authentic pool hall locations. It is realistic, yet as poignantly mythic as an Edward Hopper painting.

Most of all it catches the essence of this world in its ill-fated anti-hero, the pool shark Fast Eddie Felson who must overcome personal tragedy to beat Minnesota Fats (Jackie Gleason) in an epic contest at the Ames Pool Hall. Eddie is brilliantly inhabited by Paul Newman with huge intensity and charisma and sadness.

Newman and Piper Laurie as Sarah, his lonely, aimless, alcoholic lover are extremely affecting together, framed in the narrow deep spaces of her apartment. George C. Scott is tough and intimidating as Eddie's manager who shows the hustler how much of himself he has to sell in order to succeed.

The film is all atmosphere. It develops scenes leisurely, assembling the strangers in a sort of ceremony in the pool rooms as the night settles in and the hustles begin. The pessimistic script sounds like beat poetry, with its slang and pool jargon. Much of the dialogue is just astonishing. So lovely, so full of sorrow.

Alcoholism and pool - The Hustler review by BP

This was on my list of classic films. It was much darker than I thought it would be. The pool scenes are great (they had long pool matches back then) but it's no barrel of laughs. Newman is good I thought, so are George C Scott (from Dr Strangelove) and Jackie Gleason; Piper Laurie I wasn't bowled over by her character or her performance, which is a shame because I liked her in Carrie.